The National Trust has made a breakthrough in the battle against the destructive box moth caterpillar, giving a beacon of hope to gardeners.
Native to Asia, the box tree moth (Cydalima perspectalis) was first reported in the UK in 2008 and has since caused devastation to domestic, commercial and historic gardens, principally in the southeast of England. More recently it has spread as far afield as Edinburgh.
But now help may be at hand for topiary enthusiasts – in the form of jackdaws. 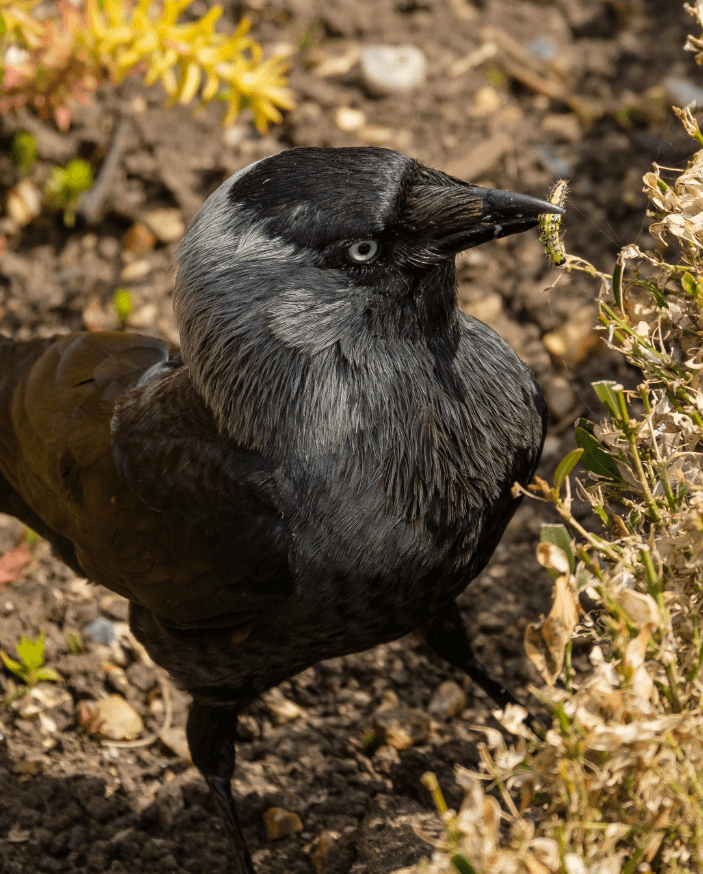 The small black crows have been feasting on box moth caterpillars at the Trust’s Ham House and Garden in Richmond, alleviating fears that the insects were unpalatable to native predators.
It is thought to be the first time the birds have been witnessed eating the insects and could offer a long-term solution to one of gardeners’ biggest concerns.
In China, the box moth caterpillar is controlled by a parasitic wasp – but until now the insect had no known predator in the UK.
The greenish yellow larvae can turn a box hedge completely leafless, before attacking the wood and causing the plant to die.
Ham House’s kitchen garden was badly damaged during the first life cycle of the caterpillars in the spring, but with the help of around 10 jackdaws regularly patrolling the hedges, the box has partially rejuvenated.
Rosie Fyles, Head Gardener at the National Trust’s Ham House, said: “We first noticed jackdaws plucking caterpillars from the box hedges in May, which was fantastic to see, but I thought it might be a one-off.
“Box hedging is an iconic part of the garden at Ham, and with so much of it, the threat of damage from the caterpillar was huge.
“So we were thrilled when the birds returned in August for the next lifecycle. We had wondered if the caterpillars would be unpleasant or even poisonous to native birds – but the jackdaws have clearly developed a taste for them.
“It’s early days, but it’s a really encouraging sign that there may be a homegrown solution yet.”
Gardeners at the 17th-century Ham estate are now exploring ways to attract more jackdaws, and other birds, including changing the way they prune the hedges.
Rosie continued: “We’ve noticed the jackdaws are most effective on the hedges which have been partially stripped of leaves by the caterpillars and so contain bigger holes – which makes the insects easier to spot.
“We’re now looking at ways to prune the hedges in a more open style, that allows increased air flow and gives the birds easier access to the caterpillars.
“Nature is the heart of everything we do at Ham, and sometimes that means we have to be pragmatic where we want to be perfectionist.”
The gardens at Ham have been managed organically for over a decade, so when an eagle-eyed visitor first spotted an unusual caterpillar on one of the box hedges in 2017, staff needed to find a way to remove the insect while working with nature.
The kitchen garden has been in existence since the 1600’s and is one of the most productive walled kitchen gardens in London. It supplies the busy visitor café with an abundance of 17th-century fruit and vegetables such as purple-podded peas, salsify and skirret.
Caterpillars have also been spotted in the cherry garden, a spectacular box parterre filled with lavender and hundreds of metres of clipped topiary. Its 17th-century design includes 80 large box cones and 250 metres of dwarf box hedging.
In total, a kilometre of box runs through the estate at Ham.
Since the arrival of the caterpillar, Rosie has been collaborating with the European Boxwood and Topiary Society on several trial deterrents including using concentrated thyme oil and caterpillar waste.
Chris Poole, Chairman of the European Boxwood and Topiary Society said: “The jackdaws at Ham are definitely contributing to the removal of caterpillars in hedges and it’s a good sign that UK birds are developing a taste for them. Over the next few years we must consider all control methods, including removal, to enable our most important box to thrive. Let’s hope local predators like the Ham jackdaws play a key role.”