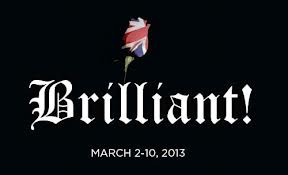 A perfect way to shake off the winter blues and get an early taste of spring is to visit the Philadelphia Flower Show, an extravaganza for the senses.

It not only happens to be America’s oldest horticultural showcase, but it’s also the largest indoor floral event on the planet, annually attracting almost 300,000 visitors during its nine-day run starting 2 March. (The Chelsea Flower Show in the UK holds the record as the world’s biggest outdoor festival). With origins dating to 1829, the show is sponsored by the Pennsylvania Horticultural Society, a non-profit group that promotes gardening, education and conservation through its numerous community outreach programs in and around the Delaware Valley.

The theme of the 2013 Philadelphia Flower Show, housed at the spacious Pennsylvania Convention Centre, is “Brilliant!” – a tribute not only to the British gardening style but also to UK heritage, and it will invariably flaunt some of the horticultural hallmarks of that nation’s famed landscape gardener, Capability Brown: manicured hedgerows, grottos and bursting floral displays.

“The show is going to portray some iconic London landmarks, but in a contemporary way,” said Alan Jaffe, PHS director of communications.

Great Britain’s influence on world culture is to be celebrated through floral and visual art. Strolling the winding paths here in the Colonies with vegetation left, right and centre, attendees will soon come to appreciate the British philosophy of considering the garden an extension of the house, like an outdoor room, which should be as attractive and comfy as the living room sofa. Visitors can expect playful displays of British traditions, such as cricket, and a rendition of the Mad Hatter’s tea party. Out of the fog, one might even catch sight of a Jack the Ripper pastiche. As the Brits might say, it’s sure to be the bee’s knees.

The show is a homage to the many diverse aspects of gardening, from the challenges and rewards of the urban vegetable plot to dramatic recreations of woodland settings replete with faux wildlife and elaborately crafted formal gardens that include water features. The talents of amateur and professional alike are on offer, all judged in their respective categories, in the hope of garnering prestigious prizes and bragging rights.

This year’s show includes a new Horticourt, a setting for showing off individual plant entries under an LED lighting system that promises to draw out the flora’s most dramatic attributes. The New Plant Showcase introduces the public to the latest varieties. This year’s offerings include new species of coleus, petunia and primula.

The uninitiated will be pleasantly overwhelmed when they’re transported from the urban outdoors to the garden of earthly delights inside the convention centre. With more than 10 acres of exhibits, ranging from single plant entries to the elaborate digital rendition of Big Ben, the show caters to many interests.

It’s not all just about plants, but also the “bones” of the garden. Structures such as buildings, walls, fences, walkways and water features, constructed especially for the show, figure prominently. Visitors are sure to be gobsmacked by the sheer scale and variety on display.

Landscape contractors and gardening supply centres are at the heart of the more elaborate exhibits, but the show is really a communal effort. Garden clubs demonstrate their talents landscaping courtyards or patios, florist shops fashion stylish centrepieces in dream-like wedding scenes and patient artisans create collages using nothing but pressed flowers that read like Monet-esque masterpieces. There is also a miniatures category, where elaborate dollhouse-scale landscapes, which are just as dramatic as their full-scale counterparts, are displayed in shadowboxes.

The region has several high schools and colleges with horticulture curricula who participate in the show, and the students’ aim is to educate the public by putting their studies into practice. The students plan, build and maintain their exhibits with the same enthusiasm as the pros.

“It’s a great experience for our students to see the industry professionals at work,” said Barbara Brown, chairperson for the W. B. Saul High School of Agricultural Sciences display. “They are the future of horticulture, so this interaction reinforces what we do in the classroom.”

The high school’s exhibit, “Tee Time,” hopes to emulate the landscape of beloved Scottish golf courses. Students from the landscape design, greenhouse sciences and landscape construction classes have been mocking up the exhibit at the school. Once complete, it will be broken down, transported to the convention centre and reassembled. Saul students man the display during the run of the show, answering questions about the exhibit and the school, the only working farm within the city proper.

Philadelphia has a rich gardening history, dating back to John Bartram (1699-1777), the founder of American botany, and it takes an army of modern-day enthusiasts to design, construct, and maintain the creations. All the plant species on exhibit, from the largest tree to the smallest miniature, are absolutely real and require care to sustain their genuine essence in the artificial setting.

Most show visitors will have little knowledge of the science and skill required to force plants from dormancy into leaf and bloom weeks ahead of their natural cycles, nor the efforts undertaken to have the displays looking as fresh on the final day as they appear on day one. But like any magic trick, the point is in the appreciation, not the mechanics. PHS is offering pre-show viewings as well, so those interested in the construction process can check out the behind-the-scenes action.

The options are boundless. Savour the sights and smells. Gather ideas and tips from experts. Watch a demonstration on plant care or flower arranging. For those in need of a little shopping therapy, the show contains acres of retail space, vendors from all corners of the globe, selling an assortment of wares from cut flowers to garden gnomes to sundials. This year’s show promises to have vendors with unique items from “across the pond,” so you might be able to get yourself a new jumper, brolly or even a pair of Wellies.