From green lipstick and life sized gnomes to a naked calendar shoot – lots of wacky and wonderful things are happening in aid of HortAid…..

Perennial has been urging people across the horticulture industry to ‘go green’ during HortAid fundraising fortnight which runs until 14th September. 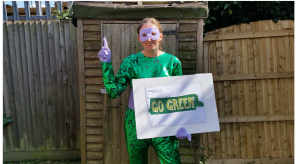 y appeal and HortAid provides a focus for those who want to get involved with fundraising. The ‘go green’ theme has been providing inspiration to people across the industry – here is a taster of some of the activities taking place:

This week at SALTEX, the Perennial ‘Kickathon’ is taking place, generously sponsored by Complete Weed Control and Everris. Each day the person shooting the fastest kick on goal can win a signed West Ham FC football. HortAid will also be the beneficiary of an auction at the Service Dealer Awards at SALTEX tonight.

Taking the green theme quite literally, Tony Arnold who is Chairman of the Professional Gardeners’ Guild and Head Gardener at Newnham College Cambridge has topped his fundraising target and so will wear green lipstick, nail varnish and wig to work in Newnham College garden on Monday 8th September.

The garden team at Hever Castle, led by Head Gardener Neil Miller, will be dressing up as gnomes while fundraising for HortAid.

Perennial’s own Samantha Morris will be dressing up in as many green items of clothing as possible, Dale Connelly (one of the ‘Skinny Jean Gardeners’) has done a 60 mile cycle ride and a team of gardeners led by Sarah Walsh has already raised £1,400 for HortAid by undertaking a sponsored coast to coast trek in Cornwall. Money raised from the Old Horts event at the National Trust’s Ascott House on 6 September will go to HortAid and green is sure to be the dress code of the day. The ‘Grubby Gardeners’, who have done sterling work so far this year fundraising for Perennial, will be shooting their naked 2015 calendar during HortAid fortnight.

The current global social media craze the ‘ice bucket challenge’ has been given a new slant for HortAid as the ‘#icebunchallenge’ – go to the Perennial channel on YouTube to see some funny videos including some iced bun antics and get in on the fun on Twitter and Facebook.

If you are inspired by any of these undertakings, there is still time to get involved. For further information and to sign your event up, please visit: www.hortaid.org.uk