In celebration of the 30th anniversary of The Historial de la Grande Guerre, Europe’s largest war museum embedded within the 13th Century Chateau de Peronne, landscape architect Peter Donegan has been commissioned to design a new garden for the French castle. 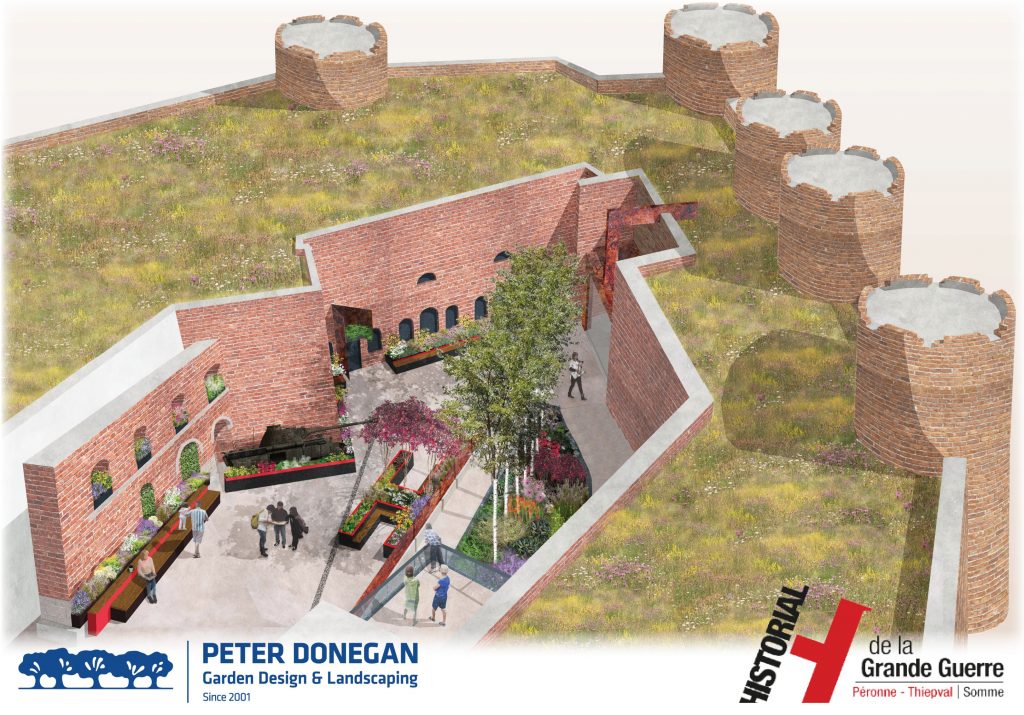 This is Peter‘s second time designing at the historic location. On this occasion, the new landscape will be built within the medieval buildings internal courtyard and officially open to the public from 25 June 2022.

In 2018 Peter Donegan was one of 14 designers selected from around the world to design at historic locations commemorating the centenary of the ending of World War One. The peace garden, Jardin Eutychia (named after the Greek Goddess of Happiness) was built in the Chateau’s dried up moat.

Peter said: “It is harrowing of the past when I consider the ultimate catalyst behind this garden and my return to Péronne. Though, it is very humbling to be invited again to design in a place I love so dearly.

“At first glance, the garden is a visitor’s most beautiful welcome. But, it also contains a herbarium of world war medicinal plants, virtual reality story telling, and a full size Panzer tank.

Over the last two years, the castle’s in-house research staff, the director, Hervé Francois, and Peter’s team have worked together on the garden’s detail. Now, Peter is challenged to build his design in just two weeks, starting later this month.

Chloe Quinn, Peter Donegan Garden Design design assistant, commented: “Any public garden designed and elevated to form a harmonious transition with remains of the past will of course have its challenges. The greatest of them here being a symbolic journey from war to peace, and our joining building architect Henri Ciriani’s vision to that now seven century’s older“.

Working with landscape contractor is Monsieur Laurent Dachy, the garden will be completed in April 2022.