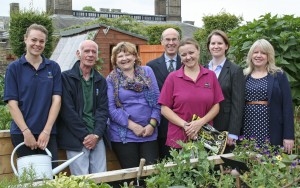 Dundee garden will be twinned with similar project in USA

Gardening Leave has unveiled detailed plans to open a new horticultural therapy site for troubled Armed Forces veterans in Dundee later this year – and has received a £10,000 donation from Scotts Miracle-Gro to get the project blooming.

The new garden, to be built by ISS Facility Services Landscaping, has received a £10,000 Gro100 Grassroots Grant from Scotts Miracle-Gro. As well as giving the project this cash boost, Scotts Miracle-Gro has forged green links between Gardening Leave and a veteran’s horticultural therapy charity garden in North Carolina in America, which it also funds. The charities’ gardens will be twinned when they both open later this year, sharing best therapeutic practice and experiences.

Gardening Leave’s Dundee project has also received a £73,000 award from the Armed Forces Covenant Libor fund* and £10,000 from the Lethendy Trust. Heather Budge-Reid, chief executive of Gardening Leave, said: “The east coast of Scotland has traditionally always had a large Armed Forces veteran population and Dundee is the third largest recruiting centre in Scotland, so we’re really excited about launching a new project in the city. To have the support of Scotts Miracle-Gro and ISS, as well as our original funding grant from the Armed Forces Covenant, is wonderful. Without the support of the City Council and their commitment to the veterans of Dundee, this dream would not be turning into a reality.” “We’re looking forward to seeing the Dudhope Park space being transformed into a garden where local veterans can grow and tend vegetables, as a first step on their journey to good health and a successful transition to civilian life.” Vicky Page, head of the Scotts Miracle-Gro UK Community Outreach Programme, said: “Scotts Miracle-Gro has worked with Gardening Leave on several projects over the years. When we heard about the new Dundee garden project we were very happy and excited to help get the garden up and running. Gardening Leave is a wonderful charity and the work they do for our veterans using horticultural therapy is simply outstanding.” Defence Minister Anna Soubry said: “I am delighted that we have been able to provide Gardening Leave with as much as £73,000 of Libor funding, and this is just another positive way that the Armed Forces Covenant is supporting our people. Our personnel and veterans play an invaluable role in society and it is only right that they get the support they deserve after leaving the Forces.”

The new Dundee garden will boast raised wooden vegetable and flower beds, communal seating area, kitchen, office and quiet area and will be planned along the lines of a traditional kitchen garden with the produce destined for local community activities. Dundee City Council’s Environment Convener, Councillor Craig Melville, said “The area at Dudhope Park is ideally located and provides an excellent space for Gardening Leave to meet its needs.We’re delighted we can help our ex-service personnel and it’s a great way to get the space back in use. “Community growing has shown positive results elsewhere in Scotland and I am keen that people in Dundee get the chance to enjoy positive gains from using unused land to grow.”