Jonathan Snow has always felt that the RHS Chelsea Flower Show is first and foremost about plants. This year Jonathan will be showcasing plants from the temperate rainforests of South America, specifically Chile.

“Designing a garden at Chelsea is a team effort and I wouldn’t be anywhere without listening to the advice of my nursery when it comes to plants, so when Trailfinders invited me to submit an application for a Show Garden in 2019, I went straight to Dave Root (owner of Kelways Plants), and asked him for some general ideas on parts of the world which have interesting plants that aren’t too impossible to grow for Chelsea.”

Jonathan will be using two species of trees in his garden. Nothofagus antarctica (antarctic beech) and Araucaria araucana (monkey puzzle). 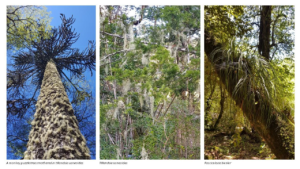 Large shurbs and ferns will also be featured. Ferns especially will be a key group of plants in this cool and damp environment. In particular, Lophosoria quadripinnata is a majestic fern that is similar to the Dicksonia antarctica of south east Australia, but without the trunk. 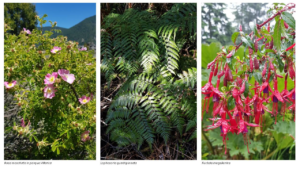 Many of the other shrubs are either not particularly fashionable or are used for some of the more mundane aspects of soft landscaping. Fuchsias in particular, have a somewhat dated image that is perhaps due for a revival, and the likes of berberis and escallonias have a bit of a reputation as ‘roundabout plants’. “I’m really looking forward to bringing out the best in these plants and challenging a few perceptions.” says Jonathan.

The next level of planting consists of the little dots and splashes of colour that will stand out against the predominantly evergreen backdrop.

Alstroemerias, Calceolarias, Gunnera manicata and  gunnera magellanica will all be featured. Other Chilean plants that Jonathan is hoping to use include Geum chiloense, which also favours shady moist conditions, and libertia chilensis and sisyrinchium striatum which both prefer a slightly more open aspect and which will be used in clearings in the garden. 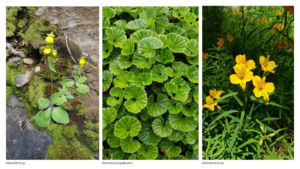 Finally, the garden will also feature Tillandsia usneoides, otherwise known as ‘Spanish Moss’ and Fascicularia bicolor is an epiphytic bromeliad. Both plants grow quite happily on the surface of trees and Jonathan is currently experimenting with ways of incorporating these plants into his garden as naturally as possible.

The majority of these plants have been sourced from within the UK, and some of the annuals have been grown from seed which was flown over from a specialist supplier in Chile. Jonathan has spent time out in Chile, researching the plant list with his planting team from James Althaus’s MarmaladeJam Gardens, and is hoping to draw attention to this part of Latin America which is less well known in the UK but which is under threat, from logging, deforestation and fires.