In March Provender Nurseries were approached by Danny Clarke and 12 Yard Productions to be the sole plant and sundries supplier for a new gardening series ‘The Instant Gardener’.

The theme behind the show is to upgrade and makeover neglected gardens or outside spaces with advice, planting and construction by Danny Clarke of The Black Gardener and Helen Skelton former presenter of Blue Peter and guest presenter on Countryfile.

Danny Clarke has been designing and planting gardens for over 17 years in and around London and Kent.  As a loyal customer of Provender Nurseries and when approached by 12 Yard Productions Danny asked if we would supply all the plants and sundries for his upcoming television debut.

Once a meeting was held on site with Danny Clarke, Richard McKenna and Liz Hughes of Provender Nurseries and Louise Hampden, a horticultural specialist in television for many years, the ball was set in motion for filming and supply to take place in May across the UK for 10 gardens.

The Instant Gardener started on Monday 20th July on BBC 1 at 3.45pm and continues for 2 weeks.  Provender Nurseries are extremely proud to support Danny Clarke and wish him every success on his blooming television career. 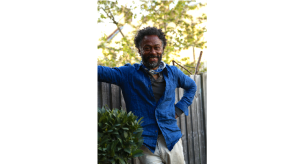