Leading architect behind Singapore’s Gardens by the Bay, Andrew Grant, says that cities need to set aside space for forests, wetlands and wildlife to be sustainable and liveable. 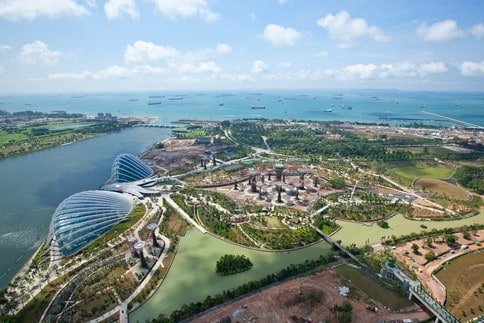 The billion-dollar Gardens by the Bay project is built on 101 hectares of land in Marina Bay, the heart of Singapore’s Central Business District. Image: Craig Sheppard / Grant Associates

British architect Andrew Grant believes that in order for people living in cities to have a holistic and well-adjusted quality of life, they must have meaningful physical and emotional encounters with nature.

This belief is at the heart of the design philosophy adopted by Grant Associates, the landscape architecture firm he founded in 1997 and now heads. The UK-based company is known for designing the Bay South area of Singapore’s iconic Gardens by the Bay, an award-winning park located in the city-state’s central business district.

Grant attributes the success and popularity of Gardens by the Bay to its ability to rekindle “human instincts about the beauty and wonder of nature”. The Gardens enhance the liveability of the city by serving as a ‘green lungs’ in an urban jungle, and to raise awareness of the need for sustainability and conservation, he says. This conviction in the value of integrating nature into cities is also evident in his firm’s mission to bring humans into closer contact with nature through landscape and urban design.

Grant’s pioneering work in sustainable landscape architecture design has earned him numerous accolades. He was made an honorary fellow of the Royal Institute of British Architects in 2010, and was awarded the title of the Royal Designer for Industry in 2012. He has worked on a number of award-winning projects, including Accordia, a housing project in Cambridge, UK that won the 2008 Stirling prize for incorporating community gardens and internal courtyards into a brownfield high-density housing site to achieve a more liveable environment.

Grant will be speaking on how natural landscapes can make cities more liveable and sustainable in the spotlight plenary session at the upcoming International Green Building Conference (IGBC). The three-day event will be held at Marina Bay Sands in the first week of September, and convene over 1,000 professionals from the sector.

Prior to the event, Grant talks to Eco-Business about how bringing city dwellers closer to nature can help achieve broader sustainability goals, the ups and downs of working on the billion-dollar Gardens by the Bay project, and how Singapore can lead the way in making Asia’s cities more liveable.

What sparked your interest in the connection between people and nature, and how did it influence the development of your approach towards architecture?

I was brought up on a farm in the UK, so I was immersed in the variety and unpredictability of nature from an early age. This connection with landscape and ecology influenced my interest in landscape architecture rather than pure architecture. Both Edinburgh, where I studied landscape architecture, and Bath, where my practice is now based, have powerful physical and cultural links with their respective landscapes. They are both places that are at one with the nature and landscape of their settings, and are examples I constantly refer to.

Today, when I travel, I am saddened to see an almost universal approach to urban development that is a generic mix of ’international’ style, materials and character. Through this, we are losing important parts of our local identities, landscapes, biodiversity and environments.

I want to see urban plans and designs that say something about the geography and ecology of the place, and make an emotional connection between people and the natural world.

Why is it important for a city’s residents to be inspired by nature? How does this influence a city’s sustainability and conservation efforts?

Connection with the natural world – access to green space, views of the sky, good quality air, water and food – is a fundamental human right, and an essential ingredient in the development of any urban environment. There is increasing evidence that contact with nature within an urban environment has economic and social benefits for inhabitants.

In the context of sustainability, we will never meet targets for mitigating climate change and preserving natural resources if we don’t understand and work with natural cycles and processes. Similarly, however successful we are at sorting out the mechanics of sustainability through innovative technologies and systems, it will be worthless if all it does is create a banal, sterile world which does not offer people a positive experience.

By embedding nature into the psyche and physical structure of a city, we can help make more sustainable developments and create places that people want to be in and take pride in. 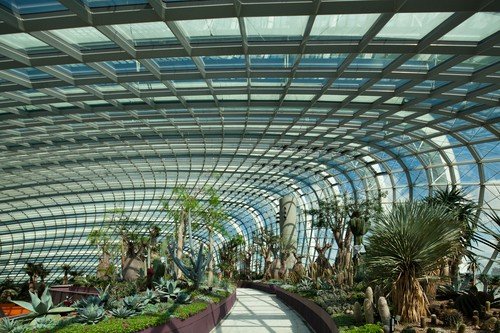 How did Grant Associates come to be involved in Gardens by the Bay? What were the most challenging and rewarding aspects of the project?

In 2006, Grant Architects’ entry in the International Competition for the Gardens by the Bay project was selected as the basis for the Bay South part of the gardens (the full Gardens by the Bay project includes Bay East Garden, Bay South Garden, and an upcoming Bay Central garden, which will link the two) and we began to develop our ideas for the 54-hectare site. We were focused on delivering something special for Singapore and we recognised the opportunity to explore new areas of tropical horticulture, architecture and integrated environmental design.

There were many technical challenges to overcome on the project, such as time constraints, developing on reclaimed land, and balancing sustainable design with the need to deliver a two-hectare cooled greenhouse in the tropics.

It is hard to identify one single rewarding aspect of the project as it has been successful on many levels. However, the almost universal positive response from visitors to Gardens by the Bay has been especially satisfying. This has also been reflected in the multiple international and local awards given to the project. The winning of the Project of the Year at the 2012 World Architecture Festival was a particular highlight.

Were there any green building and ecological development strategies that you saw in Singapore which can be applied to cities in the rest of Asia?

Singapore is a global focal point for innovation in sustainable planning and design strategies. I have been hugely impressed by the government’s strategies to link economic development, social capital and natural resources to achieve the basis for a more sustainable future.

An important part of this is the fact that being a “Garden City” and now, ‘City in a Garden’, is such a strong part of Singapore’s global identity. This simple phrase captures the plans to nurture the city for the future, and cements Singapore’s identity as a sustainable city.

Several important initiatives have grown from this approach and are particularly relevant to Asia. The Urban Redevelopment Authority (URA), for one, has a clear plan for a long term sustainable future that integrates multiple social, economic and environmental concerns.

The URA’s emphasis on making Singapore a liveable city is reflected in the National Parks Board’s ambitious projects such as the Park Connector Network, the Round Island Route and others. Similarly, the PUB’s ABC Waters programme sets an important example to the region in integrated water management.

Finally, Singapore houses one of the most impressive collections of new buildings and developments in the world which are fitted with green technologies. Examples of skyrise greenery, natural ventilation and energy efficient air-conditioning are all on show in Singapore, and are beginning to transform how the city looks and functions.

It will be important to properly monitor the performance of these new ideas over the next few years to fully understand the benefits, but already it is clear there are many technologies and design concepts that could be applied to other similar projects around the region.

You say that as the wildest, most irreplaceable parts of our planet disappear, it becomes even more incumbent on us to commit even more strongly to creating beautiful, green and liveable cities. To what degree do you feel that ecological urban development in cities can offset the negative effects such as the loss of natural biodiversity?

Nothing can offset the loss of our wild, biologically diverse landscapes and the fact that wild animals in their natural habitat are endangered. What sort of world would it be if all we are left with is dense, international-style cityscapes surrounded by the bare minimum of green landscapes?

A lot of efforts to green urban spaces do not go beyond cosmetic features such as vertical and skyrise greenery and planting trees on city streets. We need this, but more importantly, we need space to plant forest trees and manage water flows in a way that mitigates environmental damage while creating urban identity.

Even as natural areas are destroyed, we must quickly recreate a sense of nature in and around our cities. This can be done by provisioning space for pockets of mature forest or dramatic waterfalls – such as the one we designed in the Cloud Forest biome at Gardens by the Bay – to be created in the city.

Finding space to do these things in high density, land-constrained urban areas will inevitably be challenging. But the zoning of 100 hectares of prime land to create the Gardens by the Bay sets a wonderful example of how giving importance to creating an open area with mature forests and wetland areas can enhance the lives of urban populations.

It would be ideal if the world readjusted its values to retain as much of our natural environment as possible, but meanwhile, we should be more aware of how city development impacts wild landscapes. Perhaps cities could factor in the welfare of surrounding natural areas into evaluating their own progress as part of a symbiotic survival strategy.

We must plan and design new landscapes and spaces that are not only functional, but also allow us to feel like a part of the natural world, have a sense of identity, scale and wonder.