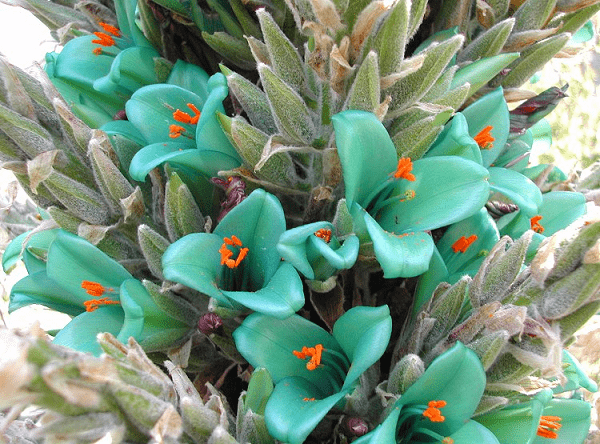 For horticulturists it is a moment of great beauty tinged with even greater sadness. An exotic plant that flowers once in its lifetime before dying has bloomed. The spiky plant had shown no signs of blossoming for 11 years but has now burst into an array of turquoise petals with orange anthers – on what is expected to be the hottest day of the year.

The bright colour combination is extremely rare to see in the plant world and is never seen on a plant native to the UK.

The flowers of the Puya berteroniana are expected to last for around two weeks but it will sadly be the first and last time the 6ft tall plant blooms as they die shortly after the flowers fade.

The plant – a bromeliad – is a relative of the pineapple and is native to the Andes in South America. It has been growing at the Ventnor Botanic Gardens on the Isle of Wight for the last 11 years.

Yesterday’s hot and humid temperatures set to hit 28C (82F) appear to have encouraged it to flower.

The attraction has over 20 species of Puya plants and around 50 of the stunning turquoise variety, however they will not all flower at the same time.

Normally the Puya berteroniana requires extremely arid conditions to flourish and has waxy, silver coloured spines on its leaves to protect them against sunlight. However, it is a hardy species and can survive in cooler conditions if kept relatively dry.

Chris Kidd, curator at the Ventnor Botanic Gardens, said: ‘The Puya berteroniana is a monocarpic plant which means it flowers just once and then dies. It will be in flower for a couple of weeks and then hundreds of the seeds will be pollinated by birds, and only one or two of those will survive. The colour is an unusual combination, usually flowers are pollinated by flies who can’t see the red spectrum, but birds can pick up the orange on the blue background. The weather patterns are changing, we had a very wet year last year and it has also been very cold, so the weather might have something to do with it flowering now.

‘They are native to the Andes in South America where conditions are very arid and the leaves are covered in a waxy substance to protect them. The Puya berteroniana can grow up to 10ft tall and last for 100 years before it flowers, we have had this particular one since 2002. Although they normally flower in the summertime it is a waiting game as you can’t tell when they are going to.’