The bright young stars of horticulture will be taking centre stage at the 2014 RHS Chelsea Flower Show, sponsored by M&G Investments, with many gardens at the Show being designed by new, up-and-coming talent, and many other exhibitors giving young people the opportunity to learn from, and be a part of, this world-class show.

Twenty-six year old, Hugo Bugg, will be designing a garden at the Show for the first time next year, for Royal Bank of Canada. The RBC Waterscape Garden – Embrace the Rain has been designed to illustrate global water issues, whilst demonstrating practical water management solutions for the home gardener. Hugo was named RHS Young Designer of the Year in 2010, when he designed a gold medal-winning garden at RHS Flower Show Tatton Park. 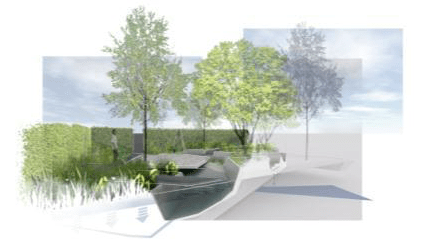 Brothers, Harry and David Rich, aged just 26 and 23 respectively, are together designing a garden for environmentally responsible utility provider, Bord Na Mona. The brothers return to Chelsea with their first Show Garden, after having designed an Artisan Garden at the Show in 2013. Designed for Beechwood College in Cardiff, the garden takes its inspiration from the constellations and will be a naturalistic, calm environment where the children can learn about both land and space.

Inspired by the personal experience of his brother’s tours to Afghanistan with the armed forces, 29 year old Matt Keightley, will also be designing his first Show Garden at RHS Chelsea. Hope on the Horizon, for servicemen’s charity, Help for Heroes, represents the complex and progressive path towards recovery experienced by wounded, injured and sick personnel.

Apprentices will be helping to build a number of Show Gardens, including The Homebase Garden – Time to Reflect, designed by Adam Frost. Part of Homebase’s Garden Academy Scheme, the apprentices will have completed 10 month’s of training, including days with experts at RHS Garden Wisley, Surrey, before coming on site to assist Adam in creating the garden. Apprentices enrolled on the RHS apprenticeship scheme at RHS Garden Wisley, will also be on site to help build spectacular gardens. Nick Drury and Daniel Vaughan, who started their apprenticeships at RHS Garden Wisley in July 2013, will be supporting the team from Crocus to build Show Gardens for The Telegraph and Laurent-Perrier.

Elsewhere in the showground, students and young people are being given the opportunity to develop practical skills and learn about the diversity of career opportunities within horticulture. In the Great Pavilion, students from schools and horticultural colleges will be helping to create some of the spectacular floral displays, including those for Hillier Nurseries, Birmingham City Council, UK Horticulture and Scotts Miracle-Gro.

Other highlights at the show in 2014, include The M&G Garden, designed by Cleve West. Inspired by the Persian concept of the ‘Paradise Garden’ this contemporary interpretation acknowledges the continuing influence of this theme and celebrates the ideas of early civilisations which still hold true today. And, inspired by the centenary of the outbreak of the First World War, ABF The Soldier’s Charity Garden, will reflect on how the damaging effects of the war were felt, not only by the people involved, but by the landscape on which the battles were fought.

The RHS Chelsea Flower Show takes place from 20 – 24 May 2014. Tickets are now on sale to RHS Members. For more information and to buy tickets, visit www.rhs.org.uk