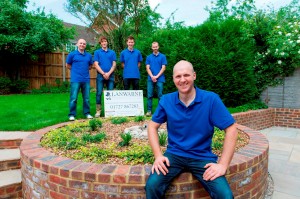 The company was established in 2003 by James Lanwarne after his budding rock career came to an abrupt end due to ‘musical differences’ and the band was dropped by its label. James went on to follow his second passion, landscaping and completed his apprenticeship in 2002. He initially completed smaller jobs such as fencing, patios and installing ponds before he enlisted the help of a garden designer and qualified himself in landscape design and horticulture. This then enabled the company to offer landscape and garden design, construction, horticulture and consultancy.

The recession proved to be a key turning point for the business as it saw smaller jobs fall off the radar as shoppers cut back and became more DIY savvy. Those who couldn’t afford a move up the property ladder simply stayed and improved their home and garden.

What proved to be a real game changer for the business and enabled it to really cement its brand, was when Lanwarne Landscapes joined forces with Burston, a local garden centre to offer free monthly design consultancy clinics. This saw the job book grow, the type of commissions become more elaborate and the company blossomed.

This time of year is particularly buoyant for the business, as the Chelsea Flower Show leaves garden enthusiasts inspired. James and the design team will attend to see what new themes and trends are emerging and aim to enter the competition themselves in the future. James has always been a fan of Alan Titchmarsh after meeting him during his graduation ceremony, so the fact he is entering a garden design for the first time in 30 years this year, gives the show an even bigger draw.

The secret to Lanwarne Landscapes success is it blends creating affordable gardens to the highest standard with exceptional customer service. Average client satisfaction ratings of 9 out of 10 have been achieved and more than 80 per cent of work is from recommendations and repeat business.

James has worked hard to diversify the business to incorporate more services and has concentrated on growing the profile of the business too. He is now a contributing writer in local consumer lifestyle magazines and host talks to budding design enthusiasts. This has proved to be a winning formula and the business has taken on additional staff to keep up with the influx of commissions.

Lanwarne Landscapes’ ability to create a real point of difference over its competitors really shone through. According to the judges, Lanwarne Landscapes’ ‘stand out from the crowd’ approach, ability to grow its net profit by nearly 50 per cent in the last financial year and its impressive ability to remain adaptable to market and customer requirements were key reasons for securing the accolades. The company’s approach to establishing new revenue streams and maintaining a luxury trade during the recession was also applauded.

James Lanwarne, of Lanwarne Landscapes Ltd, comments: “To win big at such a high profile ceremony and to beat such an impressive line-up of companies for the overall award win is quite overwhelming. The company has grown significantly due to the unrivalled passion from the team. We are all hugely dedicated to delivering exceptional customer service and quality workmanship, which is why so many commissions come from recommendations and repeat business. These award wins are ultimately a huge testament to the team and we’re absolutely thrilled to have won.”

This year almost 1,000 entries were received, an impressive 60 per cent increase on last year. The increase indicates that small businesses, the backbone of our economy, are having a surge in feel-good factor and are celebrating their achievements.

Category winners received a prize fund of £4,500, plus a half-day Marketing workshop. The FSB Worldpay UK Business of the Year also took home an extra £5,000 in prize money. The awards ceremony took place at the London Hilton Waldorf Hotel on 21 May 2014.