Mark Diacono visits Reading, where a charity has turned its roof into a spectacular forest garden – and an educational tool 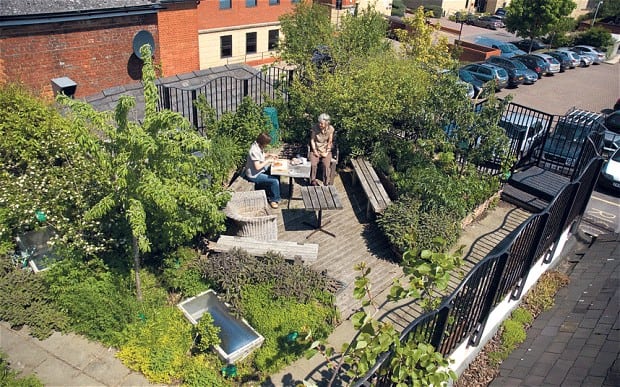 A couple of streets away from the usual high-street coffee shop chains in the centre of Reading in Berkshire, lies the RISC café. Delicious refreshment awaits. As I sip, I glance up from my cup and spot the odd tendril and shoot working its way across a skylight, hinting at what lies just beyond: a rooftop garden unlike any I’ve seen before.

Steps leading from the car park are the gateway to an edible jungle. This is a small-scale forest garden that uses layers of predominantly perennial herbaceous plants, shrubs, trees and climbers in a system mimicking a natural woodland.

The garden was designed and planted in 2002 by Paul Barney, renowned nurseryman, plant hunter and designer . His brief was far from easy. As well as creating a forest garden a few floors up, the RISC (Reading International Solidarity Centre) team wanted the garden to complement the charity’s aim of raising awareness of global issues. In addition, it needed to use the space as an outdoor classroom and demonstration area.

There are any number of gardens with admirable intentions that forget their first duty; if it doesn’t work as a garden, it doesn’t work at all. Fortunately, Paul’s design skills and knowledge of the principles of permaculture fitted perfectly with the RISC vision.

Swathes of planting in the lower tiers give structure but the diversity is still apparent. However, if you mentally clear away what’s now in front of you and consider the area that Paul had to start with, it’s an incredible achievement. At 32m x 6m, the space is more suited to a road than a garden. I asked Paul and Dave Richards, RISC garden education co-ordinator, how it reached this point.

Paul says: “The whole thing sounded fun. I’d never had a remit to go crazy and plant edibles like this, creating a jungle on a roof. I had to come up with a design that would increase the apparent surface area, the width especially, by incorporating a hierarchy of sinuous paths. There’s no axis running down the middle. Instead, views hint at what’s beyond without giving you too long a perspective. It also creates ecological niches for plants that thrive in forest edge conditions.

“This was 12 years ago and much of the planting was experimental. No one had really tried this on a roof before and many of the plants were marginal. We had little idea of whether they’d thrive or even survive up here. There are plenty of plants here that people hadn’t eaten much before, so there was a lot to discover, which was all part of fulfilling the education remit.”

“The limitations were considerable,” Dave adds. “Structural engineers told us that we wouldn’t have to strengthen the roof as long as we kept the growing substrate to 30cm. That’s only a foot of soil. Add to that the challenges of a flat roof with skylights that had to be kept clear and fan ducts to be maintained and there was quite a bit for Paul to wrestle with.

“The garden is in many ways a giant hanging basket. For the plants to thrive, we need to irrigate and keep nutrient levels high. We use compost made from waste from the café downstairs, and the garden in turn provides food for the café. We’ve also taken advantage of the gentle fall on the flat roof for our water harvesting system, which redistributes the water through a drip irrigation system powered by a small wind turbine and photovoltaic array.”

The hard landscaping is similarly well thought through. It is a combination of reused and recycled materials including rescued bricks destined for landfill, and wood chip paths edged with cordwood (tree surgeons’ waste material), with fencing and raised beds of locally coppiced hazel and willow.

Twelve years down the line, is the garden as they had imagined it would be?

“Yes, very much so, although I had no idea that everything would get quite so large,” says Paul. “We weren’t sure if a tree could survive on 30cm of substrate but the answer is yes. We had to cut the top off the tallest trees to leave them at 20ft or so. No big trees or shrubs have died, but there have been some smaller losses – for some reason currants don’t do well up here, while wineberries thrive. We had no idea how everything would do in these conditions but it’s reached a natural balance very quickly and looked like a real garden within a couple of years.”

What are their plans for the future of the garden?

“The garden is always evolving,” says Dave. “As plants have matured, shade has increased from dappled to heavy in places which has meant that some plants, three cornered leek and wild garlic, for example, have thrived and expanded their coverage, whereas others have dwindled. We are reducing shade here and there, thinning where needed. This is a something that characterised Robert Hart’s seminal forest garden. It’s too densely planted, not thanks to Paul’s design but to us adding since. We’ve been greedy and wanted to have more in the garden to make it an educational space, so the original 120 varieties have increased to 200 or so, which means it needs a little more management.”

And has the garden fulfilled the education side of the brief?

“More than,” says Dave. “Interestingly, the more the garden develops over time, the more stories it contains. It illuminates issues and cultures, and the plants help you tell stories that make connections between people and places, as well as different cultures. It’s also a great way of understanding and communicating the history of plants and colonisation which is something I’m very interested in. The global diversity here – there are plants from every continent except Antarctica – makes a very valuable resource. It’s somewhere to show how we exploit people, plants and places for money or for more noble causes.”

“I also like seeing plants that have matured from seeds or cuttings I took on plant hunts abroad,” says Paul. “One or two have a stranger tale to tell: the Nepalese pepper, an unusual evergreen grinding pepper, comes from a visit to Montmartre in Paris. I saw this shrub in a spot where the drunks throw their bottles from the Sacré Coeur, and took a cutting from it. It can be tricky to grow, but this one is thriving.”

“We opened up as part of the National Gardens Scheme after only two years as there was already enough to impress the NGS committee,” says Dave. “That proved to be a big move as we have reached a far wider audience – people who perhaps might not come to the RISC café or the fair-trade shop.

“Perhaps most satisfyingly, the garden has far exceeded the original brief as a garden that would appeal to children. It seems they love that windiness, the hidden areas – they’re in a jungle, it’s at a scale that works well for them and they can graze as they like. The combination of children and free food just works.

“The long-lost and unfamiliar flavours and plants are avenues for discovery for them. I’ve got kids who are eating Japanese wineberries, who are eating all parts of nasturtiums and going home to introduce their parents to them. It’s become part of the school culture in places which is really exciting, and beyond the original vision.”

Open for the NGS on Saturday 7 August, noon-4pm, and also on September 13 and 14