Proposals for a “secret Island” on the River Soar in Leicester have won a contest for suggesting ways it could be regenerated.

Architects from around the world were invited to submit designs for Soar Island in the city’s industrial heartland.

The island is currently home to a cement complex and a small folly.

The Royal Institute of British Architects (RIBA) ran the contest in partnership with Leicester City Council which is proposing a wider £26 million regeneration of the waterside area over the next 15 years.

More than 80 designs, from firms across the world, were submitted and RIBA’s judging panel chose that of London-based Sarah Wigglesworth Architects (SWA).

SWA’s idea was inspired by low-impact living, sustainable communities and the idea of “a secret island to live on and play on”.

Judge Glenn Howells, of Glenn Howells Architects, said: “We were delighted by the response to the competition, both by the range of ideas and the quality of thinking about how the site could transform this important part of the city.”

He said SWA’s ideas stood out because the proposal was diverse and rich, integrating heritage, landscape, ecology, and architecture together with a range of activities that could draw people to the site and create a strong identity for the riverside area as well as the island itself.

He said: “We congratulate SWA on their imaginative interpretation of our brief and look forward to seeing if their ideas can be delivered as part of the future

A spokesperson said: “The vision for our project, which combines housing, work and leisure activities, is for a new city quarter set apart but connected to the town.

“It proposes an environment where wildlife and humans coexist in a sustainable landscape surrounded by water, supported by an economy based on low-impact living and working. We are delighted to have been selected as winner for the Soar Island competition.”

City mayor Sir Peter Soulsby said he would be interested to see what elements of the design could realistically be delivered.

He said: “The competition certainly generated interest in our Waterside plans and inspired some extraordinarily creative ideas, with architects from as far away as Hong Kong and the USA keen to make suggestions for the site.

“There was plenty of imagination and creative thinking in SWA’s proposals, although clearly it would be the more commercially deliverable elements that could play a part in our vision for Soar Island.

“While the final scheme will be at the discretion of the developer who ultimately takes on this site, it’s possible that some of SWA’s pioneering ideas – such as self-build homes and workspaces – could work on a site like this.” 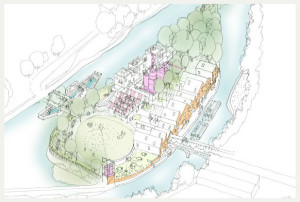