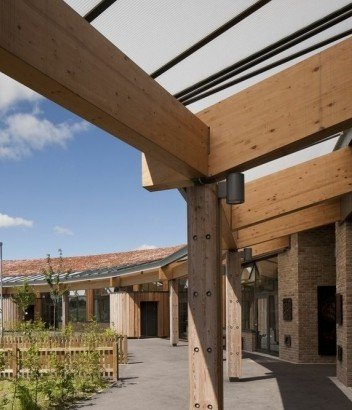 A shortlist of just 30 has been selected from a record entry of 318 British projects in the Wood Awards 2013, the UK’s premier award scheme celebrating excellence in design in wood.

The Wood Awards is a flagship for wood in the best of British architecture, furniture and design. This year’s 30-strong shortlist features unique private houses, stunning small projects, outstanding restorations, impressive public buildings and extraordinary bespoke and production-made furniture, ranging from the traditional to the cutting edge.

The independent judging panel of architecture, engineering, craftsmanship and design experts and specialists led by Michael Morrison of Purcell UK and Sean Sutcliffe of Benchmark Furniture now see the shortlist in person before making their final decisions. The winners of the Wood Awards categories and which project will receive the coveted Gold Award – the winner of winners – will be announced on the 19th November at a reception hosted by the Worshipful Company of Carpenters.

Michael Morrison said, “The diversity of this year’s entries demonstrate the range of flexibility and problem solving which timber brings. This is exciting to see, and the quality of entries this year has made the selection of the shortlist particularly difficult.”

David Hopkins, head of communications and external affairs for major sponsor Wood for Good, said, “Looking through the entries for this year’s Wood Awards, it is hard not to be struck by the impact that the timber industry is having on the face of urban architecture throughout the UK. Timber is carving itself an ever larger niche in the construction market and one factor which is repeated throughout the entries is sustainability. Timber is finally being recognised as a solution to achieving affordable, low-carbon urban development goals.”

The Wood Awards 2013 shortlist will be showcased for the first time at 100% Design in London from 18-21 September, and at Timber Expo, now at the NEC in Birmingham from 24-25 September.

As the flagship for wood in the best of British architecture, furniture and design, the Wood Awards is made possible by the major sponsorship of AHEC, Canada Wood, the Carpenters’ Company, TRADA and Wood for Good. Other sponsors include American Softwoods, BRE and the Forestry Commission.