Visitor numbers at the 2014 show in the Quarry were up by two per cent and Shropshire Horticultural Society, which runs the show, has made a “slight profit over the year”.

The details were revealed at the society’s annual meeting, where about 70 members were told that charitable donations for the year ending September 30, 2014 totalled £32,892. Beneficiaries included £8,000 to the Chartered Institute of Horticulture, £10,000 to a walled garden in Shifnal and £10,000 towards the new women and children’s centre at Telford’s Princess Royal Hospital.

The 2014 event was dedicated to the show 100 years before, which was cancelled due to the outbreak of the First World War.

In the final report of her two-year chairmanship, Donna Hamer told society members it was a “great honour and privilege” to report yet another successful year.

She said: “The 2014 show had been quite extraordinary, staged as a tribute to the 1914 show, which was cancelled due to the outbreak of the Great War.

“Once again we were blessed with good weather on both days, which enabled us to stage a show of excellence bursting with imagination, colour, fun, nostalgia and a special fly over from the Red Arrows, culminating with an awesome musical firework display.”

Mrs Hamer paid tribute to all of those who contributed to a “wonderful” flower show.

She said during the past year the society had been “very privileged” to have the the Rev. Canon Mark Oakley as president.

Christopher Jones, the society’s honorary treasurer, said the accounts for the year ending September 30, 2014 showed a “slight profit” primarily due to its investments.

Members appointed Edward Dugdale as the society president for 2015. The incoming chairman is Stephen Kynaston, a local businessman with offices in Frankwell.

Following the meeting at Shrewsbury Town Football Club’s Greenhous Meadow , a presentation of a cheque for £3,500 was made by the society to the military charity Combat Stress. 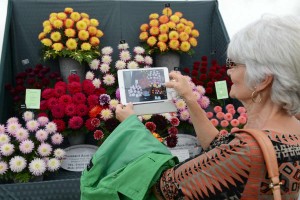