In the midst of a home workout boom, Exo-Gym has launched, bringing a versatile gym rig to people’s gardens

Fitness has been a hot topic over the last year. When the first lockdown was introduced 12 months ago, the British public seemed eager to find replacements for gym closures or simply for their typical daily steps. Public Health England announced its Couch to 5K was downloaded more than 850,000 times from March to the end of June, nearly double the amount from the same period last year, and

Gyms are now set to reopen on 12 April with COVID measures in place, but will all their members want to return? Outdoor fitness and home workouts have seemingly soared in popularity throughout the pandemic. A recent study by RunRepeat revealed three out of five adults now opt for outdoor activities as the best way to keep fit. And the School of Calisthenics – ‘calisthenics’ being bodyweight strength training – said it had more than 30,000 sign-ups for its online classes in the first lockdown.

Alex Evans has found a way to combine the two – garden gyms. After being made redundant last year, Alex decided to turn a passion for fitness and a desire to run his own company into Exo-Gym, which creates gym rigs for people to workout in their own gardens. 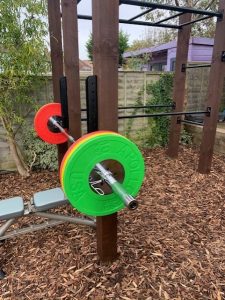 “A light has been shone on health and fitness lie never before, but the gym experience is likely to have changed,” says Alex. “A garden can be made into a functional space and give people a gym in the most accessible place. They also double up as kids’ play apparatus as well. There’s a big opportunity for it to be included as part of a garden redesign.”

The idea first sparked from Alex’s nine-year stay in Australia, where gyms in parks and public spaces were growing in popularity. When he returned to the UK in 2012, he hoped to bring the concept back with him, but realised it had already caught on. “Pretty much every park had chin-up bars installed or heavier duty exercise machines, so we kind of put it on the back burner.”

Last summer, though, he decided to bring back the idea but, this time, with the aim to bring gyms to people’s gardens instead. Whilst there were competitors out there, they were marketing towards fitness enthusiasts. Alex, on the other hand, wanted to market his products towards families and as part of a more functional garden. “That’s where the biggest growth is. Others in the market are focusing on the 18% of people who are really invested in the gym, those who know the difference in doing a wide grip or a narrow grip pull-up. Our big opportunity is the 82% who don’t go to the gym. There’s a large percentage of those people who, if they had the equivalent in their garden, would be keen on using it.”

A garden can be made into a functional space and give people a gym in the most accessible place. 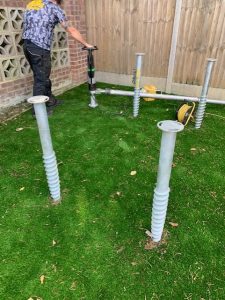 Clients can choose from three modular rigs, the maximum footprint of which is 2m by 2.8m, or they can opt for a bespoke design – anything from “a simple chin-up bar” to a “mini Go Ape”. Rigs from Exo-Gym – from the Greek word ‘exo’ for ‘outside’ – can support up to 150 kilos of weight on each bar plus more than 600kg of bodyweight, making group training sessions possible, and the cost ranges up to £3k. The company uses five-inch fence posts either fixed into the ground with Postcrete or installed using ground screws, and the metal components were developed by specialist product design consultancy Cube3.

Alex, who is based in Hove, says Exo-Gym is currently looking to establish itself in Sussex, Surrey and parts of Hampshire, but he has big plans for the company’s growth. In the first year, he’d like to build relationships with landscaping companies, among other markets. The second year, he will be looking into ways to franchise the Exo-Gym in different regions across the UK. By year three, Alex is planning to expand internationally, either directly or via licensing agreements. It’s an ambitious three-year plan, even for someone with a sales and marketing background, but Alex says the popularity of outdoor and home exercises will continue even when lockdown is lifted.

“My initial thought was that Exo-Gym would be a great way for people to COVID-proof their workouts whilst they were locked out of the gyms and equipment was roped off in parks; but for some people, there are going to be concerns around how the gym experience has changed and there are going to be more people out there who are aware of the need to keep fit and healthy…People want to encourage their children to have healthy habits that will last for their lifetime.

Our big opportunity is the 82% who don’t go to the gym. There’s a large percentage of those people who, if they had the equivalent in their garden, would be keen on using it 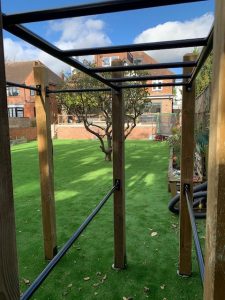 “There’s a whole market of people who don’t want to go to the gym and are rethinking their gardens; spending more time at home is giving them the opportunity to do that.

“There’s been a big growth in private client training too. Personal trainers have been locked out of gyms and have come to realise that training clients in the park allows them to keep more earnings for themselves. Exo-Gym is for those who have or are looking to open their own private training business, it gives them a really cost-effective entry point.”

With summer around the corner, it seems the ideal time to launch a garden gym company and to capitalise on the home fitness boom.