International animal welfare charity The Donkey Sanctuary has been awarded an Artisan Garden at the RHS Chelsea Flower Show 2019. The ‘Donkeys Matter’ garden will act as a focal point to celebrate the charity’s 50th anniversary and to showcase its international work. The Donkey Sanctuary was able to apply for a garden thanks to the generosity of a long-term supporter.
The ‘Donkeys Matter’ garden will use water as its central theme. The garden will show how owning a donkey means access to clean, fresh water for some of the poorest and most vulnerable communities in the world. 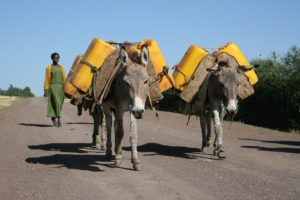 The garden will be brought to life by Williams and Prebensen Garden Designs, who won a Gold Medal and Best in Show at RHS Chelsea Flower Show 2010.
The key design feature of the Donkeys Matter garden is a path traversing from bottom left to top right. It represents the many journeys donkeys carry out on behalf of communities where no ‘white van’ or family car can travel. The garden will also feature a shelter and a well with a dripping bucket.
In places like Namibia, Lamu, Somaliland and Ethiopia, donkeys are used to collect water for whole communities. A donkey will often collect 40 – 60 litres of water at one time. The simple act of a donkey carrying water reduces the time required to access it, freeing children to get an education and women to be economically active.
The Donkey Sanctuary CEO, Mike Baker, says:
“How fantastic – a Donkey Sanctuary garden at the RHS Chelsea Flower Show in our 50th year!
“Our garden will help showcase just how important donkeys are and why they matter so much. Their contribution to humanity is huge.
“This opportunity really wouldn’t be possible without the generous donation of one of our long-term supporters. I would like to put on record my sincere thanks and gratitude to them.”
The planting of the ‘Donkeys Matter’ garden is suggestive of the dry Mediterranean. Bright vibrant flowers will bring beauty and colour to the harsh surroundings of the garden. Natural reclaimed stone and timber will be used throughout, providing visual cohesion and authenticity.
The garden will be built by Frogheath Landscapes. They have won two gold medals at the RHS Chelsea Flower Show for ‘The Potter’s Garden’ in 2014 and ‘A Trugmaker’s Garden’ in 2015 and a gold medal at RHS Royal Hampton Court Flower Show for the conceptual Synaesthesia Garden in 2015.
The RHS Chelsea Flower Show 2019 will take place from 21 – 25 May 2019. The ‘Donkeys Matter’ garden will be located on Serpentine Walk, site number is 564.
Show More
Share
Facebook Twitter LinkedIn Tumblr Pinterest Reddit WhatsApp Telegram Share via Email Print