Writtle College has been awarded the People’s Choice Award at the Young Gardeners of the Year Competition, chosen by visitors at this year’s Ideal Home Show sponsored by Anglian Home Improvements

Writtle College has been awarded the People’s Choice Award at this year’s Young Gardeners of the Year awards. Over 11,500 visitors at the Ideal Home Show sponsored by Anglian Home Improvements voted Writtle College’s garden to be their favourite out of the six participating colleges.

The People’s Choice Award marks a second win for Writtle College, after being awarded Gold and Best in Show by David Domoney and Alan Titchmarsh at this year’s Young Gardeners of the Year Awards at the launch of the Ideal Home Show in March.  In close second place was Pershore College, who were also awarded a Gold medal by the judges.

The annual awards, which are organised by TV gardener David Domoney, offer students a great opportunity to showcase their work and celebrate the best of sustainable British gardening. The competition, now in its fifth year, has given over 300 students the opportunity to create show gardens before they even leave the college gates. Each college was given a 5.5m x 4m plot to both plan and design a unique and sustainable garden to inspire city dwellers, showing what can be achieved in urban locations.

The Prince’s Foundation for Building Community set clear guidelines based on organic and sustainable principles that the charity has championed for so long.

While Writtle College was officially crowned the ‘Young Gardeners of the Year’ as they were awarded ‘Best in Show’ by the judges, it seems the college’s garden was also the garden that won over visitors as the public voted for it to win the People’s Choice Award.

The 2015 participating colleges were:

David Domoney, organiser of the competition, said: “It’s been a fantastic year for the Young Gardeners of the Year awards, and this year has seen the bar raised even higher! While Writtle College’s garden was the judges first choice, it seems the garden has also won the public over with it’s innovative and eye catching design. We’re already excited for next year’s competition!” 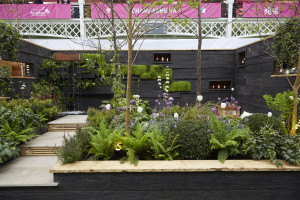