Paving and walling manufacturer Tobermore has invested £10m in expanding its manufacturing facilities. The company is ramping up production in response to a surge in market demand for its hard landscaping products.

Construction of Tobermore’s new multi-million pound factory is currently underway with project completion scheduled for the end of the year. The new plant will have a gross internal floor area (GIFA) of 4416m2 and is expected to create dozens of local jobs across numerous departments including production, dispatch and haulage, as well as sales and administration.

The one-acre expansion to Tobermore’s headquarters brings the total site area to more than 50 acres. The new factory will be Tobermore’s fourth block paving manufacturing facility which is expected to increase production capacity by more than 30%.

David Henderson, managing director of Tobermore, says: “This plant will give us significant increased capacity to make another one million square metres of block paving per year. We are already looking forward to 2021 when we will be able to take huge amounts of new business on board.” 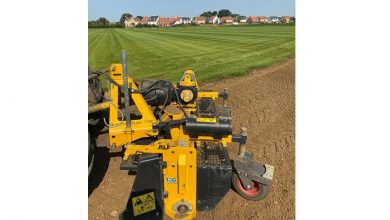