The Trimax family continues to grow as they appoint Patrick O’Callaghan to fill their newly created role as European Supply Manager.

What started as a kiwifruit production machinery manufacturer in the 1970’s, Trimax is now a market leading brand on a global scale – taking new mowing innovations to another level. The striking red colour is now becoming an iconic feature in the groundscare market; with the machines being relied upon by professionals around the world.

After the launch of the popular Snake roller rotary mower last year and with its UK operations team moving to a highly impressive new premises in Northamptonshire; it is an exciting time for the company.

The company is going from strength to strength and the newly created position is testament to its recent growth.

“Trimax is a growing business – certainly in this part of the world. There is a lot more potential for even further growth; so for me, it’s a case of coming in at a very good time,” said Patrick.

Patrick arrives at Trimax with a wealth of experience after joining from Brush, the largest independent manufacturer of turbo generators in the world; where he also held a supply management role.

In his new position, Patrick will be ensuring that 90% of the parts used for production are sourced in the UK and Europe as well as overseeing the general strategic supply element of the business. It is a career move which Patrick believes will bring great things for both himself and the company.

“I’m looking forward to having the opportunity of putting my mark on the supply chain side of things, while also speaking to our dealer network and end users,” he said. 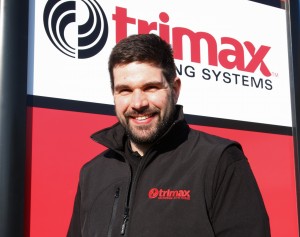