Incilipinar Park in Denizli is the first Turkish park to be awarded the coveted Green Flag Award, joining the very best green spaces across the world.

The Green Flag Award is the international mark of a quality green space, judged by green space-expert volunteers, across eight criteria, including horticultural standards, cleanliness, sustainability, community involvement and providing a warm welcome.

Incilipinar Park in Denizli was visited by a team of international judges (including Mike Bent of Bury Council, England and Harry Schrotenboer of Almelo Council, Netherlands) who were impressed by the standards and management of the park.

One of the largest green spaces in this progressively developing city, Incilipinar Park is well-used by local residents and international tourists alike, providing a range of facilities and community activities to create a welcome breathing space.

A unique feature of this special park includes a central pond, with fountains, music and lighting effects – providing a splendid visual and audio show on summer evenings. 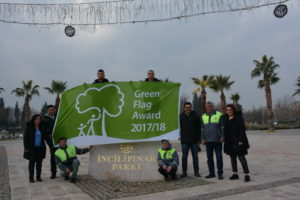 Berna Yilmaz from Denizli Metroplitan Municipality said, “We feel honoured to be the first Green Flag Award in Turkey. We are sure this work will receive a very positive response at a local and national level.

“It is very pleasing that the existing works we have always done are crowned with such an award. This award has inspired us to do sustainable works for other parks in Denizli.”

Green Flags have been flying over the best of the UK’s parks and green spaces for over two decades. And the scheme is currently expanding to celebrate the very best around the world.

In addition to the UK’s nations, the scheme is now running in Australia, New Zealand, the Republic of Ireland, Spain, Scandinavia, Germany, the Netherlands and the United Arab Emirates.

Carl McClean, newly appointed International Development Manager for the Green Flag Award, who visited Turkey with the judges said, “It’s inspiring to see a scheme that is so beneficial to parks and communities, and that originated in England, being valued within the parks sector around the world.”

“Very much in tune with current societal affairs, the Green Flag Award not only drives improvements in parks and horticulture, but also puts great emphasis on the importance of community involvement, biodiversity and the environment which is clearly at the forefront of many countries’ agendas for the future.”