All statistics are based on those surveyed and compare May 2021 to May 2020, with the exception of confidence; confidence is compared at the time of survey (July 2021) to the same time last year.

The material shortage, perhaps unsurprisingly, continued to have a damaging effect on the industry. As a result of the ongoing lack of material availability, things appeared to finally start to slow down. Torrential rain dampened construction output, it dipped by 0.8% according to the ONS. And in addition, the UK economy also experienced a slow-down despite major lockdown restrictions lifting.

Participant comments expressed that commercial landscapers were especially struggling with material shortage, and domestic landscapers are having a difficult time finding staff.

The UK Landscape Barometer has again reported another drop in confidence across the industry, with now only 34% feeling more confident compared to the previous month. This is the second month in a row displaying a decrease. 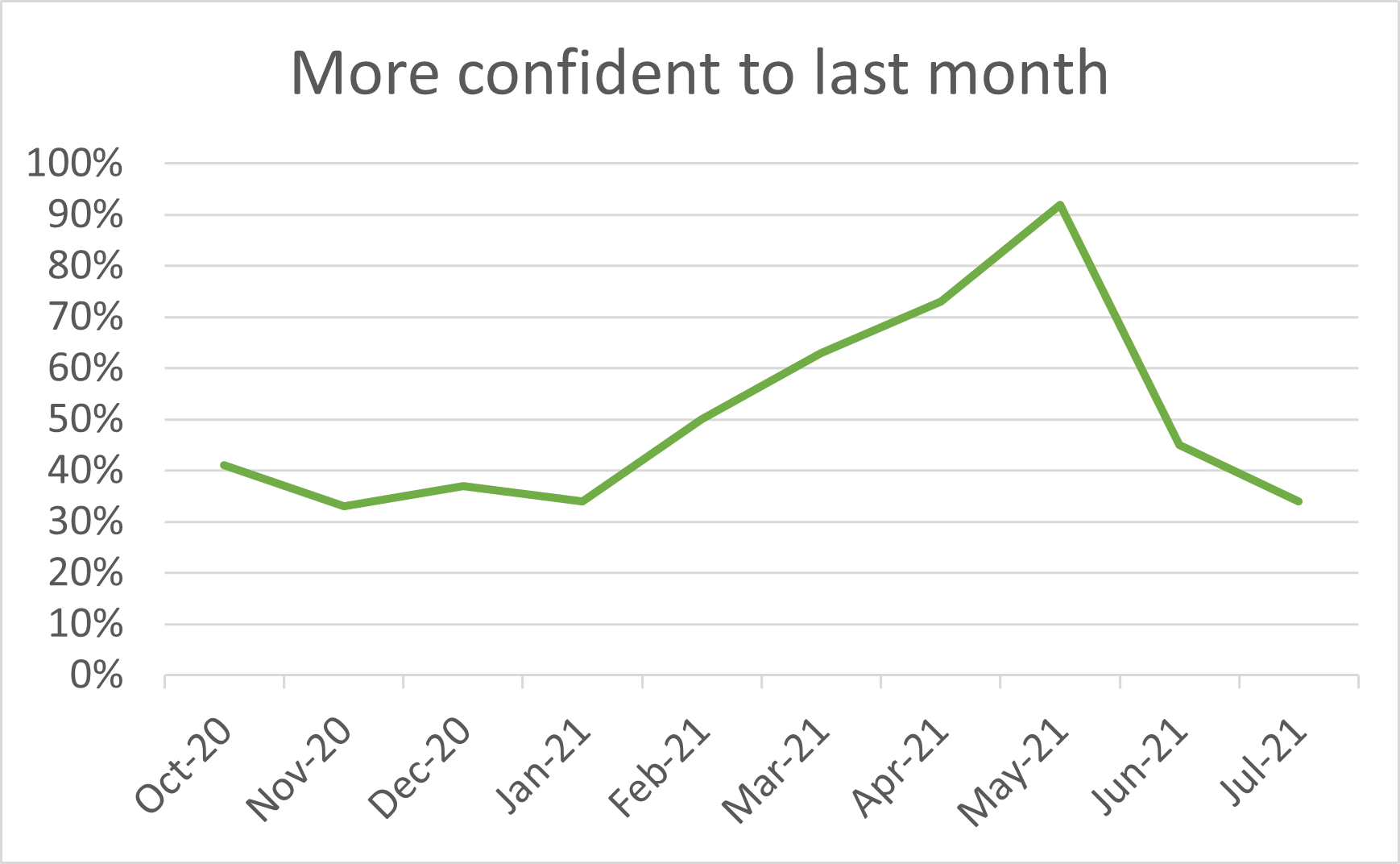 Nonetheless, 71% of respondents reported that they had experienced an increase in turnover, and 78% with enquiries.

Nationally, 79% of respondents reported increases in enquiries, 70% were working on more projects, and overall turnover increased by 50%.

Again, the greatest increase in turnover was seen by design and build companies at 64%.

Projects and conversion rates saw 50% of respondents responding with increases. 75% of participants were also experiencing an increase in turnover.

Turnover was on average 53% higher, and average project commencing time for domestic landscapers was 6 months.

On average, turnover rose by 30% for commercial landscapers. Enquiries increased by 28%, and projects, 27%.

Turnover for garden designers increased on average by 38%, and enquiries 50%.

Projects remained high, with an increase of 127% – very positive to see, and, this is higher than last month’s data.

The design and build sector presented some of the highest average increases across the industry. Overall, they experienced the greatest increase in turnover at 64%, and also in enquiries at 94%.

Nurseries had another dominantly positive month. However, quotes displayed a fall compared to last month’s data. Nonetheless, confidence and turnover presented that 100% of respondents were seeing increases, and quotes, 33%.

On average, turnover for nurseries increased by 64%, and quotes, 23%.

However, things appeared to be more evenly spread under quotes and turnover for soil suppliers. On average, quotes were 37% higher, and turnover, 28%.

If you would like the full report or would like to contribute to the UK Landscape Barometer moving forward, please send an email to Gemma Lloyd on [email protected] or call on 01903 777570.