Once again, the UK Landscape Barometer can confidently report there has been dominantly high performance across all sectors for the trading month of March 2021.

Overall, garden designers continued to present the highest percentages in increases. This comes as no surprise due to the high number of people wanting to improve and enhance their gardens because of lockdown, and the increased amount of time being spent at home. But it was interesting to see that domestic landscapers saw the largest difference in increases when compared to their figures from the month before (February 2021).

Nationally, projects were up 76%, conversion rates increased to 48%, and turnover increased from 31% last month to 84% this month – this in particular displaying a hugely encouraging rise.

Confidence continued to show its repetitive pattern, rising for the fourth month in a row since the start of the UK Landscape Barometer. 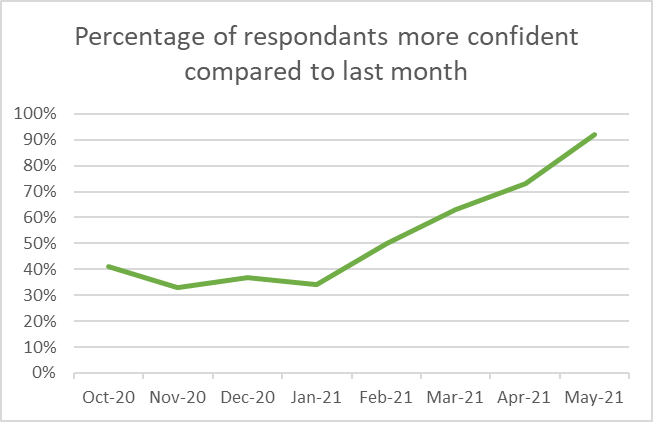 Domestic landscapers saw an enormous increase in turnover, rising to 111%. This is alongside a rise in enquiries, where an 85% increase was recorded. Projects elevated to 91% and conversion, 73%.

All in all, a very successful performance for domestic landscapers.

Commercial landscaping was also showing increases, however compared to results recorded last month, minor decreases were shown. Nonetheless, the decreases are so minor, it doesn’t appear to be the start of anything to worry about for the sector.

The sector has again experienced the greatest percentage increase for the month, with enquires standing at an 166% increase.

On average, turnover was also at a high, coming in at a national increase of 140%.

Currently, design and build is an area that has become busier due to high demand. In fact, the sector seems to be working in unison with the garden design overload.

Percentage increases overall, were high. Turnover stood at an 85% increase, whilst enquiries hit triple figures, sitting at 108%. Projects also reached the 100% mark, and conversion rose from 55% last month, to 70%.

One nursery said: “The shortage in plant stock, particularly with trees, and the increase in demand is resulting in a significant increase of customers wanting to secure stock for projects from one to three years from today. Snooze, you lose!”

Soil suppliers saw an average increase of 35% in volume sold, and a 26% rise in quotes.

The UK Landscape Barometer is continuing to record data that is presenting an increase-on-increase month after month, making it clear that overall the industry is currently a busy business in high demand.

Though the high demand has been long desired over the past year, evidently things are getting difficult due to the global material shortage. Already this is affecting businesses across all industry types by causing delays and lengthening lead times, and, costing companies more due to material price increases.

The high increase in national turnover is positive in allowing companies to try and keep themselves supported, as the months ahead seem uncertain due to the material crisis.