Working with local company Avonmore Associates Ltd and Toro distributors Lely UK, the Council has upgraded its irrigation system with the installation of 45 Toro Infinity sprinklers and a TDC 2-wire control system.

With a 27-year old Toro irrigation system previously in place, the Council took the decision to upgrade following its success in becoming the ‘centre of excellence’ for outdoor bowls in England.

The decision, which also saw the relocation of the Bowls England headquarters to Royal Leamington Spa, called for a re-evaluation of the facility’s technology; a move jointly instigated by the STRI, Warwick District Council and head greenkeeper, Michael Finch.

Michael explains more: “Our previous irrigation system was very old; it was time for a modernisation. The STRI also visited and said we needed an operational system good enough for Bowls England – in essence, we needed reliability and up-to-date technology to ensure the club continues hosting international events.”

Opting for the Toro TDC System, which uses innovative technology to provide a safe, reliable and energy efficient irrigation solution, Michael says that the new addition is not only simple to use, but flexible enough to meet his and his greenkeepers’ needs.

“We had the option to go with another brand, but opted for Toro because their systems are reliable, easy to maintain, and are what we’re all used to using. There are three of us that maintain the greens, and we all find Toro very easy to use indeed,” says Michael.

Comparing the old system with the new, he adds: “Our previous system was hydraulic; it needed water pressure to build up, so you had to manually pressurise the system if you didn’t want to soak a bowler! Now we have a remote system, so you can turn on sprinklers as you’re standing on the green; the versatility is fantastic.”

As well as other benefits, including now being able to run off the mains, which provides much purer water than the local river, Michael says one of the best features is the ability to water twice the space in the same time.

“We can now water two greens at a time, which is great, as we can complete the job much quicker with less interruption. And as we have two pumps, not only does the water flow better, but we can reach 23m, which is an extra 2m upgrade.”

This extra reach, along with having nine sprinklers on each green (the usual is four), ensures Michael and his team don’t miss any patches; a problem that can easily arise when faced with wind on a 4-sprinkler green.

Concluding, Michael adds: “We’re very happy with the benefits the new system is providing us – I now feel we’re at the top of the tree technology wise and are fully prepped for a future with Bowls England.” 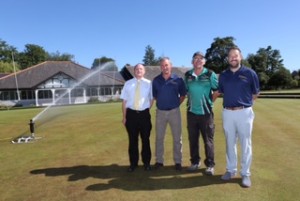