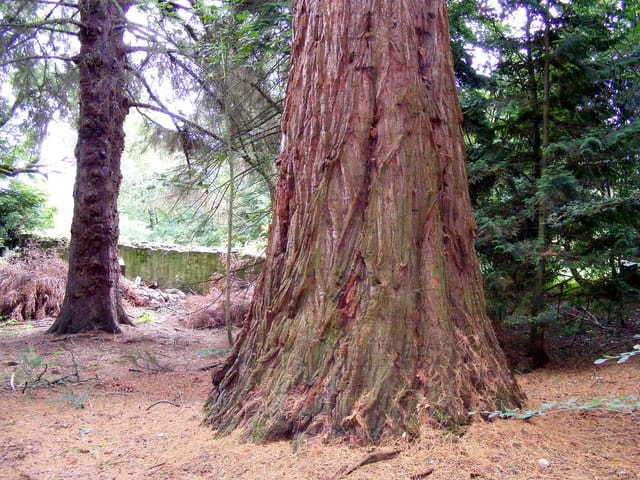 Welsh Coast Redwoods are helping to evoke 100 years of conservation and evolution for the Garden Club of America (GCA) as it celebrates its centenary with a spectacular exhibit at RHS Environment at the RHS Chelsea Flower Show.

Oxfordshire-based Applied Landscape Design designed the show garden on behalf of the GCA, and wanted to incorporate Coast Redwoods (Sequoia sempervirens), which had formed the focus of the GCA’s first major conservation campaign in the 1930s, to play a central role.

Importing Redwoods from America was not a viable option so they turned to the Royal Forestry Society (RFS), owners of the largest and oldest stand of Coast Redwoods in Europe – the RFS Charles Ackers Redwood Grove near Welshpool – for help in sourcing materials for the design. Some of the redwoods in the Grove date back to original plantings imported from the USA in 1857!

As a result, Redwood discs from trees aged about 80 years from the Leighton estate, leaf litter and other materials, together with young redwoods from Dutch nurseries, and Californian ground-flora sourced from around the UK, will form the central theme of the interactive Chelsea Flower Show garden celebrating the evolution of gardening in the USA.

Applied Landscape Design’s Director Kym Jones said: “The ‘Lasting Legacy’ display showcases the many achievements of the GCA in horticulture, preservation of natural resources, and education that has evolved over the last 100 years, and sets out key current centennial initiatives – including the Centennial Tree Project which has resulted in the planting of 23,500 trees in communities across the USA.

“The Coast Redwoods reflect one particularly important initiative from the early days of the Garden Club of America which saw the organisation establish itself as a forerunner in conservation. The role of redwoods at the heart of this display embraces elements of the centennial tree project and symbolises the continuity of the Garden Club of America’s commitment to education and scholarships.”

For the RFS, Development Director Simon Lloyd said: “We were delighted to be able to donate materials from our historic Redwood grove. Not only did the original plantings come from trees imported from America, but it is interesting to reflect that, just as the Garden Club of America was campaigning to protect and preserve redwoods in California, on the other side of the Atlantic, Charles Ackers was planting them in mid Wales. Coast Redwoods are known to live to 2000 years in their native California, so although some of our trees are now approaching 160 years old, they are still relative youngsters compared to some of those in the USA.

“In the UK, we need to consider a wider choice of tree species to plant in our woodlands to protect them better against the growing number of pests and diseases. Interest in Coast Redwood and our experiences at the Leighton grove over the last 160 years is expected to increase.

“Like the GCA, the RFS is committed to education and the sharing of knowledge and we hope that there might be further links between our two organisations in future years.”

Marian Hill, GCA President said: “Coast Redwoods have been an emblematic species for the Garden Club of America. The link with the Royal Forestry Society in our centennial year at the RHS Chelsea Flower Show is particularly appropriate; the two organisations are aligned in the common goal to protect Coast Redwoods and promote the many ecological and social benefits that standing forests provide.”