A hollowed-out mountain based on a scaffolding structure, Marble Arch Hill, was supposed to redefine the connection between Oxford Street and Hyde Park. Designed by world renowned architect MVRDV, the proposal for the park-like temporary landscape was to lift the corner of Hyde Park, bring renewed excitement to the area, and create a 25m tall viewpoint offering striking views of London.

In response to the build, Westminster council’s deputy leader, Melvyn Caplan, said: “You have to give people a reason to come to an area. They’re not just coming to Oxford Street for the shops anymore. People are interested in experiences and destinations. The pandemic has seen around 17% of stores on London’s most famous shopping street close completely.”

Unfortunately, the project did not go according to plan and the installation has faced wide-spread criticism since its pop up appeared in July. The architect’s slick CGI images circulated and painted a picture of a landscape filled with mature trees and rich vegetation. The reality, however, is a sparse spread of trees and grass clinging desperately to the structure. 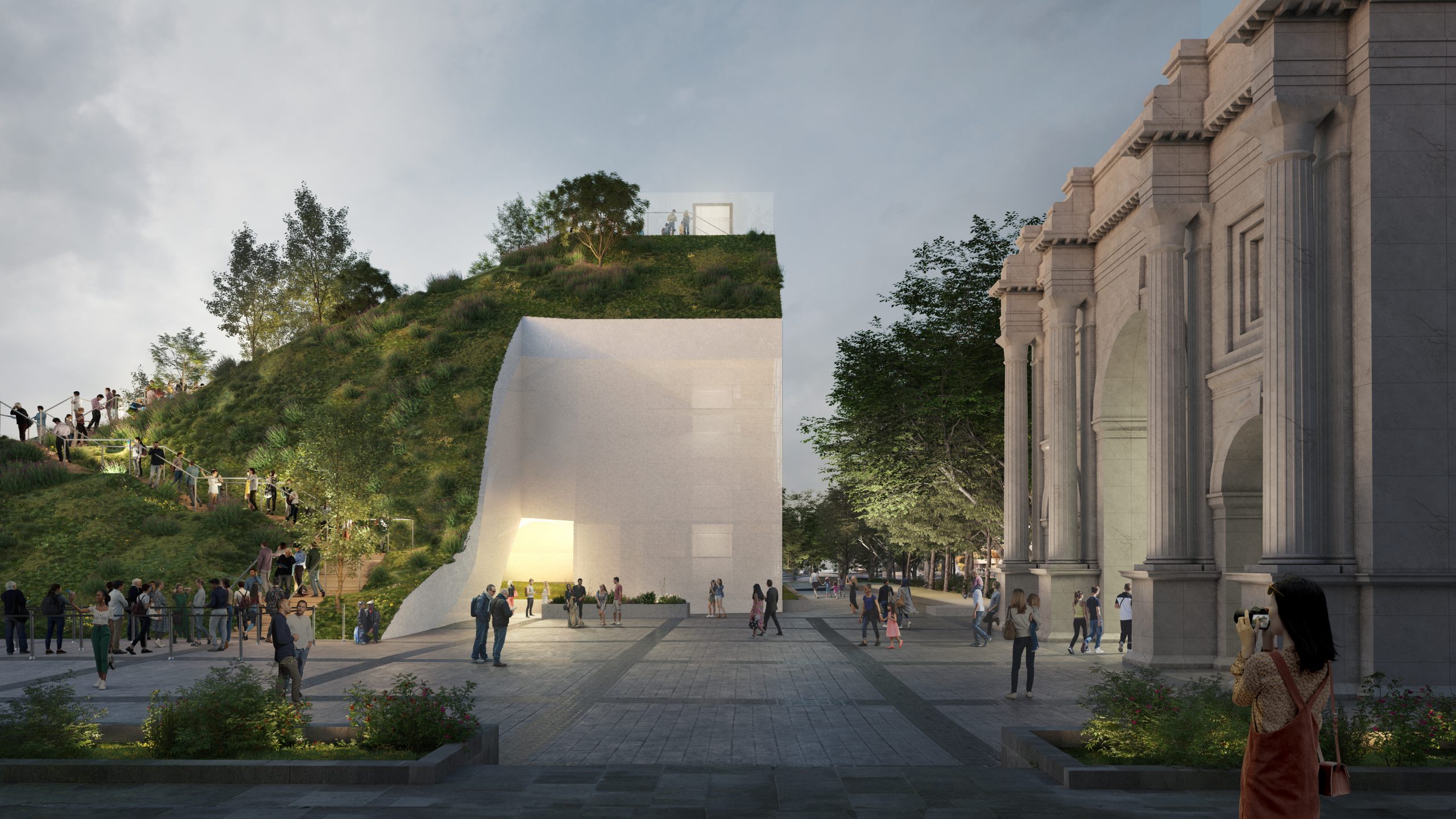 We asked Darryl Moore, landscape designer and director at Cityscapes, and Tony Wood, Garden Club London director, for their opinion on the Marble Arch Mound.

Darryl Moore said: “The Mound was poorly conceived and executed. The rationale behind it was as an exercise in advertising, an arrogant imposition to encourage yet more unsustainable consumerism, and maintain local property prices. As a spectacle it has nothing meaningful to do with landscape.

Darryl explained that the design for the Mound had previously been shelved when it was submitted as unfeasible for the Serpentine Pavillion. He expressed that it makes little sense to then locate and build the structure on one of the most pedestrian unfriendly and polluted roundabouts in London. He asks: “If the architects intended it to provide an experience of nature in the city, why was it not sited somewhere where this potential could be realised, rather than immediately opposite one of the major green spaces in London? If people want an experience with nature, then they have Hyde Park right in front of them.”

Darryl continued: “Any project that ends up tripling in budget is a case of bad management, but with this project, the rise from £2m to £6m is astonishing. Given that there was public money involved and that it didn’t go through a due consultation processes, the situation is democratically unacceptable, and this money could have been better spent on creating inclusive and accessible green spaces.”

Tony Woods agreed: “The contract was very complex, and the cost escalated above what they initially anticipated. It is a huge amount of money for something so temporary, and the project probably has had quite a big carbon footprint in its creation. The money could have been invested into existing parks and landscape features in London.”

Nonetheless, Tony explained that he does believe the industry needs ambitious projects in both landscape architecture and from a contracting point of view in order to push boundaries and show people what landscapers can do.

Darryl described the Mound as an unsustainable project, and explained that it provides nothing in terms of engagement with landscape, provision for biodiversity, or the public’s understanding of the importance of plants. “Temporary landscape installations can deliver so much more in these terms.”

“The expectations of the architects and council were unrealistic, both in terms of what the installation would actually deliver as an experience, and in terms of what they thought a temporary landscape project should actually be. Their lack of understanding of plants was paramount in the failure of the project. The idea that the sedum matting will settle in and grow, so that it looks like the lush vegetation in the initial renders, reveals a complete lack of knowledge of plants.

Tony told us that the CGI images were not realistic, but he believes they could’ve been if the structure was going to be a permanent feature, “it would take at least between five to ten years to look like that.”

“If you cast your mind back to the open ceremony at the Olympics, some landscape companies were appointed to create a giant mound and cornfields. Years and years of planning and pre-growing off site happened – so its not that its impossible to create something like that, but it’s the budget and timescale that needs to be accounted for.”

Darryl firmly believes landscape projects should be created and projected by landscape professionals, not architects. “There is an arrogance commonly found within the architecture industry, which views landscape as just the spaces between buildings, rather than the larger setting in which buildings exist.” He explained that this devaluation of landscape leads to a situation whereby it seems to many that anyone can do landscape projects, “this is patently not the case.”

It seems the whole development of the structure has been underwhelming for the public. Whilst there could still be some potential, much that needed to be considered beforehand such as seasonality, timing, and being patient with delays, was not accounted for, and perhaps it is this that has sparked the negative reaction.