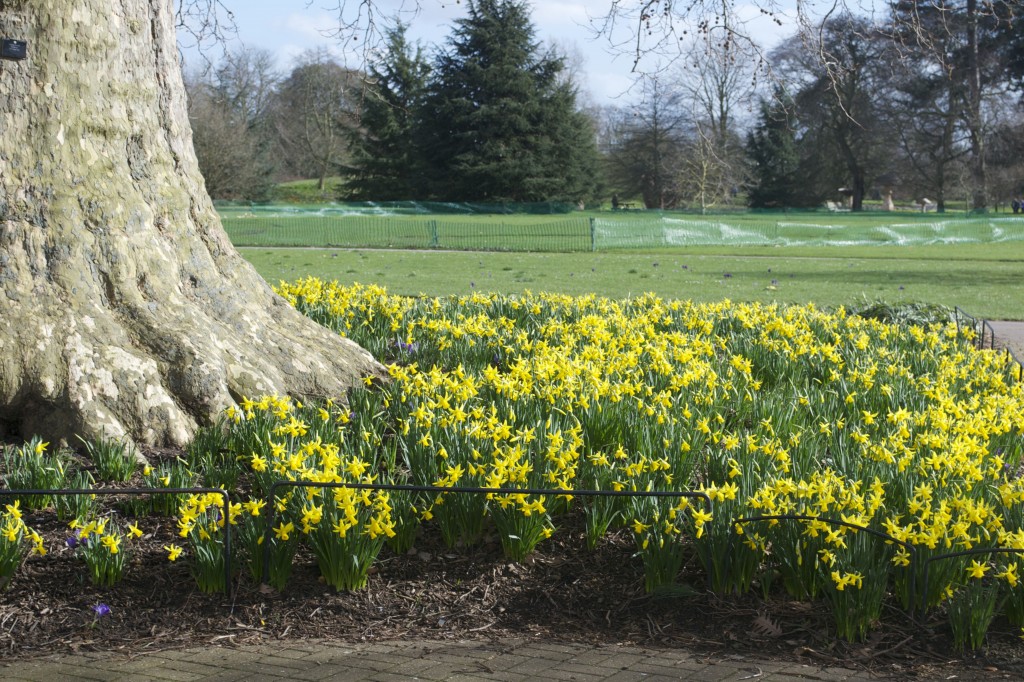 On Wednesday 26 February, in the beautiful and serene Royal Botanical Gardens at Kew, around 120 landscape landscapers, designers and architects, and representatives from the APL, SGD, BALI and the Landscape Institute all gathered together to debate issues affecting the industry as a whole, ‘Working together as a team’. The brief was to lay everything on the table, and give individuals the chance to voice their concerns about the current working relationship between contractors and designers.

To start off the afternoon, we were lucky enough to enjoy a fantastic tour of Kew’s gardens as well as what goes on ‘backstage’ by Head of Arboretum Tony Kirkham, during which he educated the delegates on the multitude of tree species he grows and maintains, as well as what they do to conserve waste and reuse it on site.

As the afternoon continued, we were brought to the Jodrell Theatre for refreshments and to prepare ourselves for the imminent debate. As everybody took their seats in the lecture theatre, the panel of distinguished, successful and knowledgeable industry names introduced themselves. James Aldridge, Andrew Wilson, Nick Coslett, David Dodd and David Sewell all volunteered to sit on the panel and share their various views and opinions of the sort of issues and problems facing the industry at present. 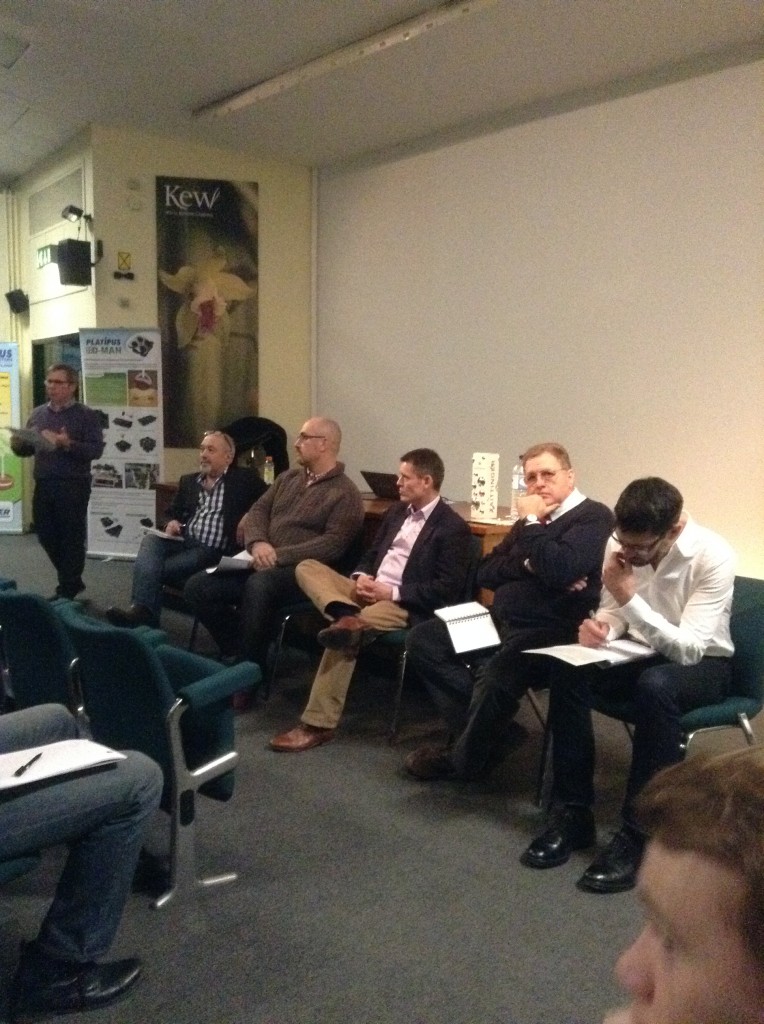 Chaired by Jim Wilkinson of Eljays44, the company behind Pro Landscaper magazine, the debate began with a look into why the event was important. The use of contracts was first brought to the table, and each panel member shared their experience with them. Whether it’s a long drawn up legal document or a simple list of terms and conditions, the general emphasis seemed to be on the need to look after yourself. Trust is a great thing, if you have it, but often clients can change their mind, there can be financial issues, and occasionally there are those out to con you. Legally, it’s sensible to protect yourself and your business with a contract. The panel itself discussed their use of the JCLI contract, standard APL contract, independently drawn up terms and conditions, or in many cases a lack of the need for a contract because of mutual trust between client and business. Regardless of your thoughts, the general consensus was that whatever way you choose to go, it is vital that you make your needs or requirements clear to the client – it needs to make sense to them.

The main issue that reared its head most prominently was the fact that communication between designers and landscapers is not strong enough, and it is proving to be detrimental to the industry in terms of professionalism and profitability – and in some cases, fairness and equality to each party respectively.

Should designers supply the plants? This topic was debated for a great deal of time, with a split of opinions that almost seemed to be right down the middle. Supplying of materials, traditionally, has been the duty of the contractor, regardless of whether they are for hard or soft landscaping. On the other hand, however, many designers prefer a much more hands on approach to their design, and prefer to choose and supply the plants to ensure the aesthetics are properly realised in their planting, making sure they are facing the right direction etc…

In truth, it’s not as simple as perhaps I’ve made it sound, as the debate then turned to face the issue of legalities, responsibilities and liabilities. If designers are supplying the plants, are they also willing to take responsibility for their maintenance and upkeep? What about if the plants die or aren’t of a good enough quality? Who is liable? Surely not the contractors because they didn’t choose and supply them, but then again – why the designers, because all they did was choose and supply them, and often won’t get involved with planting them?

Nick Coslett, nurseryman and supplier, whose business has seen an increase in designers purchasing plants since the recession, stressed at this point that whoever supplies the plants, you must use a reputable nursery, and take advantage of their horticultural knowledge and expertise to make them part of the team. Know what you’re buying, and in many ways this lack of communication in the industry could be helped by a stronger emphasis on trusting the source of the plants. Many contractors will not have an issue with the designer supplying plants, so long as they have a say in where they come from, and can ensure that it is a trusted and industry approved supplier. The associations represent an important part of the industry, but there is still a proportion of designers and landscapers that are not members, which in many respects means that the associations have a duty of responsibility to raise the bar of professionalism. If the associations continue to learn to work more closely and better communicate with each other, it will encourage those individuals to raise their standards – the industry can move up together.

From a designer’s point of view, times have been hard, and some clients just aren’t willing to pay more than a certain amount, which is often why they will offer a service to supply the plants as well. Where is a line drawn, though? Does it end with plants or can they legitimately supply other materials as well? The debate showed two sides of the same coin, because there have also been cases in which the contractor has provided garden design as a ‘free service’, which effectively cancels out the need for a professional designer – and many designers have lost business because of this. To me, as an onlooker, this brought out a strength of the industry relationship between contractors and designers, because when this came out it was mutually agreed that this was appalling practice.

So why do designers have the need to supply plants, and why aren’t clients willing to pay as much for their design expertise? What it boils down to is the fact that designers are offering a premiere service, and it is undoubtedly a hard time financially for them, but they (as with any company) need to promote value to their business. If the client isn’t willing to pay, be prepared to walk away.

It is paramount, and perfectly legitimate to calculate as accurately as possible the time spent on a client. If you are choosing the plants and doing the specific research, you can charge a fee – it’s not just your skills as a designer they are paying for, it’s your business, time and knowledge. What it comes down to is this – believe in yourself as a valuable and reputable business.

Regardless of the different opinions and disagreement between contractors and designers, I was able to pinpoint one thing that everyone could agree on – communication in the landscape gardening industry just isn’t good enough. So, where do we go from here? As clear in any industry, everybody likes to run and practice their business in their own way. Regardless of this, we need to stop seeing ourselves in little bubbles and realise that the landscape gardening industry is operating in a hugely under-regulated way, and the select few who choose to be part of an association need to understand that they can act as role models for the industry as a whole. Wherever you think your duty ends and the contractor/designer’s begins, an enhancement of industry communication will doubtlessly make for a cleaner and more professional way of working – and as a businessperson you will be able to draw your own boundaries, but with a firmer realisation and understanding of where your peers are drawing theirs.