Yorkshireman Chris Myers has won a silver medal with his show garden, Hay Time in the Dales, at this year’s RHS Chatsworth Flower Show.

The garden is a picture-postcard representation of life in the Yorkshire Dales, with a small converted barn and cottage garden, as well as some of the area’s fantastic wildlife habitats, including a mini broadleaved woodland planted with species typical of the Dales, dry stone walls complete with mosses, lichens and sheltered nooks and crannies, and a traditional hay meadow full of native wildflowers.

Creations & Installations helped Chris to build the garden, which is sponsored by Johnsons of Whixley – a Yorkshire nursery who kindly gifted many of the plants. Barcham Trees generously supplied the native trees and award-winning drystone waller Gordon Simpson from Nidderdale gave his time and expertise for free, building the cottage from weathered stone that will be returned to Yorkshire after the show. 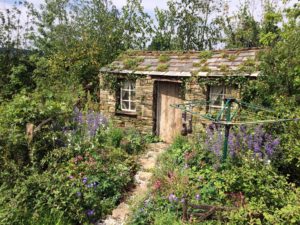 As well as being an experienced garden designer and TV presenter, Chris is also an ambassador for local charity Yorkshire Dales Millennium Trust (YDMT) – a role which had a big influence on his award-winning design.

Chris said: “The Yorkshire Dales landscape is changing. Many of the barns once used to shelter sheep are now houses, and the species-rich hay meadows on which those sheep were fed are now grassy fields with no wildflowers. We’ve lost 97% of our traditional hay meadows. Fortunately YDMT is working hard to save these precious habitats and the wildlife they support, and I’m passionate about supporting this work. I’m really chuffed that this garden has proved popular with the RHS judges here at Chatsworth. Fingers crossed the visitors will be inspired too.”

Once a common sight, species-rich hay meadows like the one featured in this garden at Chatsworth, are now among the most threatened habitats in Europe.

Through the Hay Time project, YDMT is working with farmers and landowners across the Yorkshire Dales and Forest of Bowland to help to bring these iconic habitats back from the brink. Locally-harvested wildflower seed has been added to more than 700 hectares so far, and traditional low-intensity management has been reinstated to help bring back native wildflowers and provide a vital habitat for the many rare species of wildlife they support.

YDMT’s chief executive, David Sharrod, said: “As well as being an ambassador for YDMT, Chris is a skilled plantsman and designer with a passion for the Yorkshire Dales, and we were thrilled when he invited us to be involved in this exciting project. It’s been a fantastic experience for us from the outset, topped off with an opportunity to be involved in filming for BBC Gardeners World. We are really grateful to Chris and the team for all their hard work and support – the garden perfectly captures the very best of the Dales, and the silver medal is testament to the brilliant job they’ve done.”

RHS Chatsworth Flower Show is open to visitors from 6-10 June, with highlights including the ‘Hay Time in the Dales’ garden to be shown on Gardeners’ World on BBC2 at 8pm on Friday 8 June.

Exciting New Initiative to Boost Nature on Your Doorstep