Shortly before Dino Zelenika left Bosnia-Herzegovina with his mother 14 years ago, he bought a small flower that would change his life. 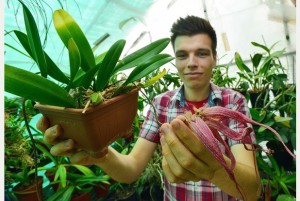 Now 23, Mr Zelenika is a leading international authority on orchids and tomorrow flies to Johannesburg for his first World Orchid Conference as a qualified judge after five years of training – and also as a speaker and exhibitor.

His mother, Stela, who was leaving Bosnia-Herzegovina after falling in love with an Englishman serving there with the United Nations, had told him that small white flower would, like many orchids, be hard to grow and was unlikely to survive. But her words only served to stoke a lifelong fascination.

“When we got to England I started growing some on the window sill and I have to admit the first few of them died,” said Mr Zelenika, who has just graduated from the University of the West of England.

He perfected tending the plants and before long every window sill in the house was covered in orchids. By the time he was 12, he was pestering mum to join the Bristol and West Orchid Society.

“It was really funny because mum phoned up and they said was she sure because it wasn’t fun and games,” Dino said.

“Then we went down and they thought she wanted to join and said it was nicer to have someone younger but then she pointed saying it was actually me and their mouths were wide open.”

During his time with the society, was taken under the wing of member Ian Parsons, who had grown orchids for 40 years and gave his protégé a greenhouse he still uses.

“It’s heated and humidified to provide the perfect environment for growing my plants, which include carnivorous plants and a small amount of herbs.”

He was soon exhibiting and by the age of 17 had won his first competition at the Devon Orchid Society’s annual show. Now he grows rare orchids – not “the hybrids you see in the supermarket”.

The win in Devon was followed by tours of wild orchid sites in his native Bosnia-Herzegovina, which brought a lot of attention in the UK.

Then in 2011 while still a teenager he went to the 20th World Orchid Conference in Singapore as a trainee judge. After returning from Johannesburg, he goes to Laos for six months to set up the work of orchid propagation and conservation, in a project funded by Simon Pugh-Jones of the Writhlington Orchid project based at the school of the same name in Radstock, Somerset.

“Simon established a laboratory out there a few years ago and it’s challenge I’m looking forward to,” he said

“For a while my friends thought my passion was somewhat strange,” said Mr Zelenika.

“But now my friends all think it’s great and as my peers got older I think they appreciated the value of nice gardens and plants more.

“When I meet new people around my age they are often quite impressed and ask me questions about it, but to be honest I have found very few people in my age group who like plants as much as I do.”

There are 25,000 orchid species orchid, of which Mr Zelenika says around 2,000 are beautiful.

“People’s perception is what you see in a supermarket but they are only the tip of the iceberg.

“Some are very small and ambiguous while some, such as the Grammatophyllum in East Asia can weigh several tonnes and be more than 6ft high.”

His very favourite is the Cattleya from South America.